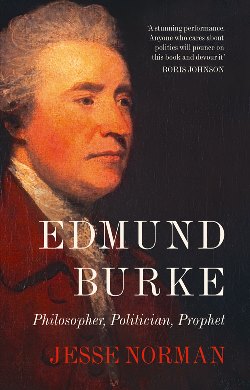 Philosopher, statesman, and founder of modern conservatism, Edmund Burke is both the greatest and most under-rated political thinker of the past three-hundred years. Born in Ireland in 1729, and greatly affected by its bigotry and extremes, his career constituted a lifelong struggle against the abuse of power. Amid the 18th century’s golden generation that included his companions Adam Smith, Samuel Johnson and Edward Gibbon, Burke’s controversial mixture of conservative and subversive theories made him first a marginal figure, and finally a revered theorist – a hero of the Romantics. He warned of the effects of British rule in Ireland, the loss of the American colonies, and most famously, he foresaw the disastrous consequences of revolution in France. This he predicted, would trigger extremism, terror and the atomisation of society – a profound analysis that continues to resonate today. In this absorbing new biography Conservative MP Jesse Norman gives us Burke anew, vividly depicting his dazzling intellect, imagination and empathy against the rich tapestry of 18th century Europe. Burke’s wisdom, Norman shows, applies well beyond the times of empire to the conventional democratic politics practised in Britain and America today. We cannot understand the defects of the modern world, or modern politics, without him. Taken from Harper Collins