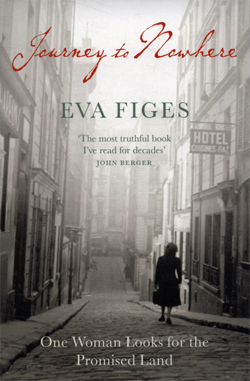 Journey to Nowhere: One Woman Looks for the Promised Land

Eva Figes and her family fled the horror of Nazi Germany when Eva was only six, forced to leave behind them friends, relatives and their housemaid, Edith. Ten years later, Edith suddenly re-enters their lives. Having miraculously survived wartime Berlin, she had reluctantly emigrated to hostile, volatile Palestine. Recounting Edith’s story, Figes boldly argues that Israel was a product of US foreign policy and continuing and widespread anti-Semitism. Part memoir, part brave polemic, Journey to Nowhere is both a moving account of post-war displacement and a fierce attack on America’s role in the Middle East.