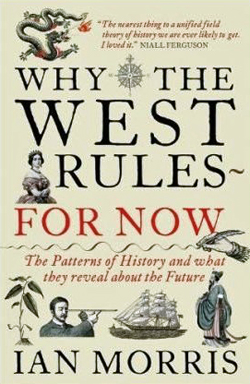 Why does the West rule? Eminent Stanford polymath Ian Morris answers this provocative question, drawing uniquely on 20,000 years of history and archaeology, and the methods of social science. Why did British boats shoot their way up the Yangzi in 1842, rather than Chinese ones up the Thames? Why do Easterners use English more than Europeans speak in Mandarin or Japanese? To put it bluntly, why does the West rule? There are two schools of thought: the ‘Long-Term Lock In’ theory, suggesting some sort of inevitability, and the ‘Short-Term Accident’ theory. But both approaches have misunderstood the shape of history. Ian Morris presents a startling new theory. He explains with flair and authority why the paths of development differed in the East and West and – analysing a vicious twist in trajectories just ahead of us – predicts when the West’s lead will come to an end.