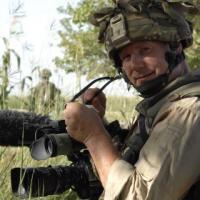 Vaughan is an award-winning video journalist who founded the Frontline Club in London in 2003 as an institution to champion independent journalism. During the 1990s he ran Frontline Television News, an agency that represented the interests of freelance video journalists. Its history has been detailed in a book “Frontline: The True Story of the British Mavericks who Changed the Face of War Reporting'” by the BBC. Since 1988 Vaughan has filmed in Iraq, Afghanistan, Bosnia, Chechnya, Kosovo and elsewhere, including the only uncontrolled footage of the Gulf War in 1991 while disguised for two months as a British Army officer. Vaughan was a founding Trustee of the Rory Peck Trust. His home was refuge to Julian Assange for 13 months in 2011/12. In 2011 Vaughan won a Bayeux award for his film on US Medivac shown on Al Jazeera.