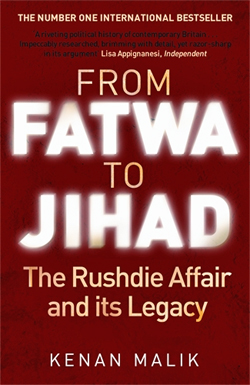 On the eve of the twentieth anniversary of the Rushdie fatwa, From Fatwa to Jihad tells, for the first time, the full story of this defining episode and explores its repercussions and resonance through to contemporary debates about Islam, terrorism, free speech and Western values.

When a thousand Muslim protestors paraded through a British town with a copy of Salman Rushdie’s The Satanic Verses before ceremoniously burning the book, it was an act motivated by anger and offence as well as one calculated to shock and offend. It did more than that: the image of the burning book became an icon of the Muslim anger. Sent around the globe by photographers and TV cameras, the image announced a new world. Twenty years later, the questions raised by the Rushdie affair – Islam’s relationship to the West, the meaning of multiculturalism, the limits of tolerance in a liberal society – have become some of the defining issues of our time.

Taking the Ayatollah Khomeini’s fatwa as his starting point, Kenan Malik examines how radical Islamhas gained hold in Muslim communities,how multiculturalism contributed to this, and how the Rushdie affair transformed the very nature of the debate on tolerance and free speech.