How do you predict a modern election? Has politics shifted irrevocably? Since David Cameron’s unexpected majority in 2015, elections and referenda have defied expectations, with pollsters and pundits alike surprised by result of the EU referendum and the election of Donald Trump in the US. Boris Johnson’s thumping majority in December 2019 was heavily trailed by most polling companies, but the reality came as a shock to many on all sides. In the rescheduled Orwell Lecture, Daniel Finkelstein, who has been on the intimate inside of politics, working in Number 10 as well as in the Lords – but also on the outside as a thoughtful commentator – will talk about the way elections are predicted and strategised.

Daniel Finkelstein, OBE, is the Associate Editor, a Columnist and Leader Writer for The Times. He also sits in the House of Lords as Lord Finkelstein. As well as his weekly political column in the comment section and his Saturday Notebook, he writes the “Fink Tank” for the Saturday paper, a statistical column on football.

The Orwell Lecture, given in memory of the author, essayist and journalist George Orwell, has been given annually since 1989 and has attracted notable speakers including Dr Rowan Williams, Dame Hilary Mantel, Robin Cook and Ruth Davidson MSP. Speakers are tasked with discussing any topic ‘Orwell might have been interested in’. The lecture is generously sponsored by Richard Blair, George Orwell’s son.

Make sure to register again if you were previously booked on for the lecture in November, as you will need a new reservation. Please aim to arrive at 6.45PM for a prompt start at 7.00PM. 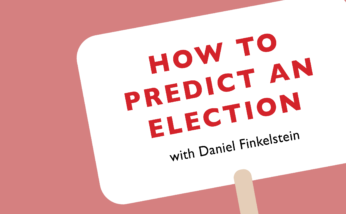