Join us for this essential debate on how and why, too often, society is failing to keep women safe. The murder of Sarah Everard was billed as a watershed moment, yet at least another 125 women were killed by men in the following twelve months. A panel of experts including Labour’s Shadow Minister for Domestic Violence Jess Phillips, Nazir Afzal OBE, and two journalists shortlisted for The Orwell Prize for Exposing Britain’s Social Evils 2022, Hannah Al-Othman of the Sunday Times and Louise Tickle of Tortoise, discuss their investigations and the shortlisted Observer campaign End Femicide (Yvonne Roberts), to consider what is going wrong in protecting women and what can be done to reduce current levels of violence.

Jess Phillips is the Labour MP for Birmingham Yardley and Shadow Minister for Domestic Violence and Safeguarding. She was first elected in 2015 and became Chair of the Women’s Parliamentary Labour Party in September 2016. Before elected as an MP, Jess worked with victims of domestic violence, sexual violence and human trafficking, and she continues to speak up on behalf of those who struggle to have their voice heard.

Hannah Al-Othman is a news reporter at The Sunday Times, based in Manchester, where she has broken stories including the murder of Kenyan woman Agnes Wanjiru by a British soldier. Previously she was a political correspondent for BuzzFeed News, based in Westminster, and has worked online and in print for regional and national newspapers.

Louise Tickle is an award-winning freelance journalist with an expertise on domestic abuse and child protection. She provided the main reporting for ‘Hidden Homicides’ by Tortoise Media, which has been shortlisted for The Orwell Prize for Exposing Britain’s Social Evils 2022.

Nazir Afzal OBE, was Chief Crown Prosecutor for NW England and formerly Director in London. Most recently, he was Chief Executive of the country’s Police & Crime Commissioners. He was appointed to the Independent Press Standards Organisation (IPSO) and is also a National Adviser on Gender Based Violence to the Welsh Government. Most recently he joined the advisory board of Google’s Innovation Fund for counter-extremism. 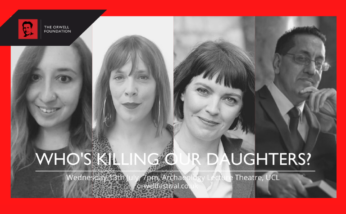