Free - please register for a ticket

The Orwell Lecture 2016 will be live-streamed. Click here to watch the broadcast.

The Orwell Lecture was established by Professor Sir Bernard Crick –  founder of the Orwell Prize – and has been held annually since 1989. Originally held at Birkbeck, University of London and the University of Sheffield, the Lecture is now held at University College London each autumn.

‘The Right to Dissent (and the Left too)’

Ian Hislop is a writer, editor and broadcaster. He was educated at Ardingly College and Magdalen College, Oxford. He has been editor of Private Eye since 1986. He is probably best known for his role as a regular team captain on the BBC show Have I Got News for You.

He joined Private Eye in 1981, and became editor in 1986. He has appeared on BBC Question Time, written and presented documentaries for television and radio about various subjects including the History of Tax, female hymn writers, Dr Beeching, Victorian Philanthropists, the First World War, and The Stiff Upper Lip. In 2016 he presented a documentary on Victorian Benefits: Workers or Shirkers. He co-wrote a dramatisation of The Wipers Times with Nick Newman, which was nominated for a BAFTA for Best Single Drama of 2014, and won the Best Single Drama Award in Broadcasting Press Guild Awards, 2014. In 2016, he and Nick Newman wrote the critically acclaimed 2016 Radio 4 comedy drama Trial By Laughter.

Ian has received numerous awards, including a BAFTA Award in 1991 and a British Academy Lifetime Achievement Award at the British Comedy Awards 2011 for Have I Got News for You,  Editors’ Editor, British Society of Magazine Editors in 1991; Magazine of the Year, What the Papers Say in 1991; Editor of the Year, British Society of Magazine Editors, in 1998; Channel 4 Political Awards, for Political Satire in 2004; and a Channel 4 Political Award, for Political Comedy in 2006, A Voice of the Listener and Viewer Award for Excellence in Broadcasting 2009, Political Studies Association. Diamond Jubilee Award. Best Political Satire, 2010, a Liberty Human Rights Award for Private Eye in 2011 and Trip Advisors Travellers’ Choice in 2012. Have I Got News For You won a BAFTA in 2016 for Best Comedy Programme. 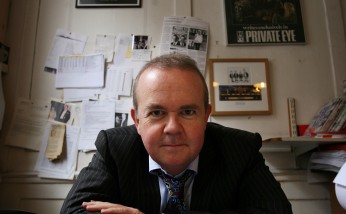