The shortlists for the Orwell Prize 2012 were revealed on Tuesday at our annual shortlist announcement and debate hosted by the University of Westminster. On our website you can read the full list of 6 shortlisted books and an extract, 6 shortlisted journalists and their submitted articles, 7 longlisted bloggers along with links to their blogposts. Book judge Miranda Carter wrote a piece for The Telegraph on each of the shortlisted books. After the announcement, Brian Cathcart chaired a debate: Our overwhelmingly white media are inevitably delivering ‘white news’. The debate featured Hannah Pool (author and former Guardian writer), Yasmin Alibhai-Brown (Independent columnist and winner of the Orwell Prize 2002 for journalism) and Rob Berkeley (Director of The Runneymede Trust). Footage of the entire evening will be uploaded to our website soon. 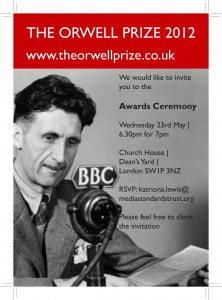 This year’s Orwell Prize awards ceremony is taking place on Wednesday, 23rd May, and it would be wonderful if you could join us. The 2012 winners – of the Book Prize, Journalism Prize and Blog Prize – will be announced from 7pm, with drinks from 6.30pm, at Church House, Westminster, London SW1P 3NZ. Shortlisted books will be on sale beforehand courtesy of Marylebone books. If you’d like to come along, email katriona.lewis@mediastandardstrust.org to reserve your free place. Hopefully we’ll see you there!

75 years ago Orwell fought in the Spanish Civil War. This week we celebrated the anniversary of the publication of the book inspired by this experience, Homage to Catalonia. Like two of the books on this year’s shortlist (The Beautiful and The Damned and Dead Men Risen), Orwell had to fight for the publication of this novel because of its politics. His controversial criticisms of communists were unpopular with his regular publisher.

This week’s entries were published on 25th and 27th April 1942. Next week’s entry will be published on 29th April 1942. Don’t forget our other Orwell Diary blogs: his Hop-Picking Diary and The Road to Wigan Pier Diary. If you’ve got any suggestions about our website(s), we’d love to hear from you – email us on katriona.lewis@mediastandardstrust.org or follow us on Twitter. 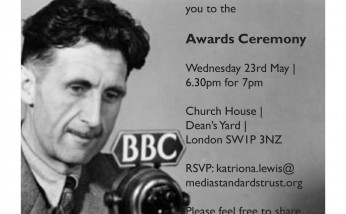