A panel of judges has been announced for the 2021 Orwell Youth Prize which this year invites young people age 12-18 to submit writing in response to the theme ‘A New Direction: Starting Small’.

This year’s theme aims to support young people to think hard about their local environment, trust their observations and use the authority and knowledge they have to report and write creatively on the changes they’d like to see to create a better society, starting with what’s on their doorstep.

The judging panel for this year’s Prize reflects the diversity of genres and styles being welcomed in response to the theme.

We are delighted to have such a skilled and genre-crossing panel judging the Youth Prize this year. The panel is reflective of the multiple ways our entrants choose to express themselves and respond to our theme. We’re particularly proud to have Jessica Johnson as a judge, a youth prize winner whose writing has affected change and who is now pursuing new writing projects

Jessica Johnson, a 2019 Orwell Youth Prize winner, gained notoriety last summer as she described ‘having fallen into her own story’, amid the A-level results algorithm fiasco. Her powerfully prescient dystopian narrative ‘A Band Apart’ set in a society where young people’s futures were determined as a result of location and class. Jessica is now studying at St Andrews, working on multiple writing and creative projects.

For the first time, the Orwell Youth Prize is inviting game design entries to the competition. With the support of games professionals, including Imre Jele, Founder of Bossa Games and the designer of Orwell’s Animal Farm Game, the Orwell Foundation is exploring the potential of game concepts and narratives to construct new narratives and possibilities in storytelling. Dan Bernardo, Founder of Playtra Games, will bring his expertise in game design to the panel.

It’s an absolute privilege to be the first judge for game narratives for The Orwell Youth Prize. I’m delighted to see game narratives being recognized for their value in parallel to other forms of literature, from poetry to fiction, and essay writing. Game narratives have developed substantially in the past decade and the games industry is at a tipping point in terms of new routes and opportunities to explore new forms and ways to tell stories now and in the future.

The 2021 Orwell Youth Prize prize closes at midnight on Friday 4th June and winners will be announced in late July (date TBC).

Naush Sabah is a writer, editor, and educator from the West Midlands. She is the Editor and Publishing Director at Poetry Birmingham Literary Journal, a visiting lecturer at Birmingham City University, and a trustee at Poetry London. Her poems or criticism have appeared, or are forthcoming, in the TLS, PN Review, Modern Poetry in Translation, The Dark Horse, and elsewhere. Her debut double micro-pamphlet box set, Heredity/ASTYNOME, was published by the Broken Sleep Books imprint, Legitimate Snack (2020).

Born a games geek and growing up as a design nerd, Dan has degrees in Anthropology and Graphic Design. He specialized in developing equity-based diverse and collaborative company cultures, spearheading Creative departments and eventually working as Vice President Creative for a range of tech companies. In 2019, Dan decided to follow his childhood dream and founded Playtra, an independent game studio, which quickly grew into a team of nine diverse staff.

Jessica Johnson is a past Orwell Youth Prize winner who gained recognition for her prescient short story following the 2020 A-Level fiasco. Her writing has been featured in Dazed magazine and the 2020 Aesthetica Creative Writing Annual. Jess has recently finished writing and directing an audio drama with New Creatives North, co-funded by BBC Arts and Arts Council England, which is to be released in the near future.

The Orwell Youth Prize is a writing prize for young people from across the UK. Orwell claimed that his main motivation for writing was ‘political purpose’, which he defined in the widest possible sense as a ‘desire to push the world in a certain direction, to alter other people’s idea of the kind society that they should strive after’. Today, Orwell’s desire to push the world in a certain direction has inspired writers and campaigners across the world, whether in politics, journalism or civil society, as well as countless individual readers. The Orwell Youth Prize aims to ensure young people have the opportunity to be part of this group, and that they have opportunities to discuss and debate the society they are a part of and to communicate their own ideas for the society we should be striving after today. 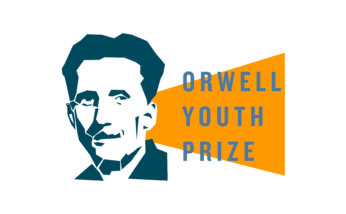