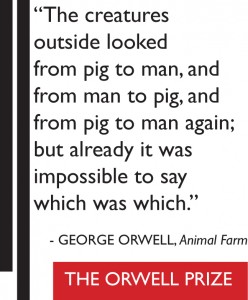 Today we celebrate the anniversary of the publication of Animal Farm which was first available in 1945. In the same month Orwell began work as the Literary Editor of The Tribune, he also began writing one of the works his name would be most remembered for. The satirical novel chronicles the revolution of animals against Mr Jones at Manor Farm; an allegory on the Soviet regime. This year we added the preface to the Ukranian edition of Animal Farm to our website. We also have a special Animal Farm page with links to much more including the first chapter, the original preface and writers pieces on how the book has influenced them. To celebrate today our online fans have been tweeting their first memory of reading the classic and we have been posting quotes from the work on our Facebook page. The most popular quote today was, “The creatures outside looked from pig to man,and from man to pig,and from pig to man again;but it was already impossible to say which was which”.

Next week The Orwell Project will be hosting an event at the Camden Arts Centre. The project is working with artists, writers and performers to create new work responding to or inspired by Orwell’s minor work, life and musings inspired by his essay ‘British Cookery’. In 1946, the British Council commissioned Orwell to write the essay in which he presented six of his own recipes, exploring class-distinctive eating, championing local produce and the home kitchen as the beating heart of British cuisine. A eulogy to sugar, fats and the three-course breakfast, the resulting essay was considered extravagant and anachronistic in the context of post-war rationing, and went unpublished, as it remains to this day. The Orwell Project say; “Distinct from Orwell’s familiar dystopian reputation, there is a wealth of idiosyncratic observation, epicureanism and cultural questioning across his non-fiction. His essays, letters and journalism explore pop culture, art criticism, entertainment, broadcast, class and society in a seminal period for state revision and the rise of media; Bevin published his bill on the NHS, the coal industry nationalised, new town centres opened and TV crept slowly into British homes.” From Autumn 2012 they will be presenting a brand new series of events and projects exploring fresh, unfamiliar perspectives on the influence of one of our most celebrated writers.

This week we observe the anniversary of the death of the writer H.G. Wells who was a contemporary of Orwell’s he references in many of his essays. You can read ‘You and the atom bomb’, ‘Can socialists be happy?’ and ‘Notes on Nationalism’ as well as many more on our website.

This week’s entries were published on 14th, 18th and 19th August 1942. Next week’s entries will be published on 22nd and 25th August 1942. Don’t forget our other Orwell Diary blogs: his Hop-Picking Diary and The Road to Wigan Pier Diary. You can sign up to our newsletter If you’ve got any suggestions about our website(s), we’d love to hear from you – email us on katriona.lewis@mediastandardstrust.org. You can also follow us on Twitter and like us on Facebook. 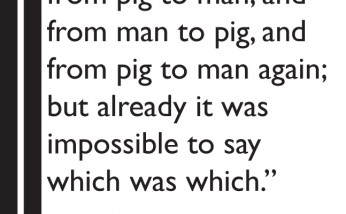