‘Hope High’ is a BBC Radio 5 Live podcast series which takes the listener into the heart of the lives of the children recruited to run drugs by organised gangs. Despite the best efforts of a school, this process is invisible to the authorities and institutions who might have intervened. The Orwell panel were impressed by how Deas “managed to eschew the cliches to produce totally fresh insights into how children can be manipulated into gangs, and how hard it then is for them and their families to escape.”

The series revealed an issue that communities and policy makers can only deal with if the forces that drive it are understood: policies need to address the right problems. Deas’s journalism, and the absorbing way the story unfolds, provides the essential material for a more realistic policy response and a more informed public. It is British public service journalism, impartial and hard hitting, at its best.”

I am grateful to the keen minds and journalistic experience of our panel… for the series of fascinating conversations which produced our shortlist, and, ultimately, the winner. Investigative journalism has been made harder by Covid, but rarely has it been more needed. In bringing to light the experiences of a community caught in the county lines drug trade, Hope High is in the best traditions of Orwell, and the Prize for Exposing Britain’s Social Evils that carries his name. It gives space to people often spoken about by others to describe their lives and dilemmas in their own voices, and unpicks the causes of the injustices confronting them, with an artistry and clarity that hopefully, will help to build understanding and a shared resolve to do something about it.”

Annabel Deas is an investigative journalist at BBC Radio 5 Live based in Salford. In 2018 she was awarded funding by the Winston Churchill Memorial Trust to travel to the US to research best practice for telling the stories of marginalised people. On receiving the award, Deas commented:

If I told you about some of the incidents which occurred during the year, I spent in Huddersfield you might not believe me… Serious violence was woven into the fabric of everyday life for children as young as two… Families with very small children whose houses were taken over by armed criminals selling drugs were left completely unprotected by police. These men have now been sentenced to decades in prison, but the families have been torn apart… Across the UK this problem is growing, and the violence is getting worse; medical staff are now reporting young men who have been raped by county lines gangs as punishment and young women passed around gangs as a ‘reward’. Local authorities are aware of these issues, but not enough action is being taken to protect some of the most vulnerable people in our society. The voices of these victims are rarely heard as they live in fear, but they must be listened to.”

The judges for the 2021 Orwell Prize for Exposing Britain’s Social Evils are Paul Kissack, Group Chief Executive of the Joseph Rowntree Foundation; Ian Birrell, executive editor of the Mail on Sunday and winner of the 2020 prize; Rianna Croxford, award-winning BBC reporter; Professor Donna Hall CBE, chair of the national think tank New Local and chair of the Bolton NHS Foundation Trust; and Alice Miles, Director of Strategy at Policy for the Children’s Commissioner.

Previous winners of The Orwell Prize for Exposing Britain’s Social Evils include the BBC’s Alison Holt for her reporting of care of the elderly and vulnerable, Sarah O’Connor in the FT for a report on Blackpool, Nicci Gerrard in the Observer for her writing about Dementia, Felicity Lawrence for an investigation into the impact of migrant gang work, and Max Daly, Global Drugs Editor at VICE.

The Orwell Foundation also today announced that the Orwell Prizes will return this autumn in a new format, with plans for an ambitious live event series in 2022, and a revised system of finalists and winners to replace the current longlist to winner structure, with the aim of achieving greater impact for the writing and reporting which comes through the prizes. More information will be announced in the autumn. 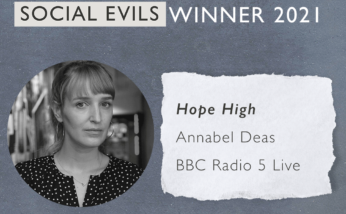