With reporters under immense pressure to cover an intense start to the year, the Foundation is extending the deadline and eligibility period for entries to The Orwell Prize for Journalism and The Orwell Prize for Exposing Britain’s Social Evils to Thursday 31st March 2022.

This extension will not change the date for the Orwell Festival of Political Writing and the rules otherwise remain the same.

Journalists, editors and award administrators are invited to submit entries via the online forms. Entry should only take a few minutes, but please read the instructions on the form carefully to make sure you have the necessary material ready before you begin. Full rules are available here, and selected highlights are featured below.

Finalists will be announced in the spring. Each Prize is worth £3,000 to the winner, and the awards will be accompanied by an Orwell Festival of Political Writing, featuring finalists from across the prizes, as well as other important voices in contemporary political writing and thinking.

About this year’s judges

The Orwell Prize for Journalism 2022 panel is chaired by Isabel Hilton, journalist and founder of China Dialogue, who is joined by Helen Hawkins, ex-culture editor at The Times, Marcus Ryder, Head of External Consultancies at the Sir Lenny Henry Centre for Media Diversity and chair of RADA, and Sameer Padania, author and independent journalism consultant.

We plan to announce the judging panel for The Orwell Prize for Exposing Britain’s Social Evils 2022 shortly. 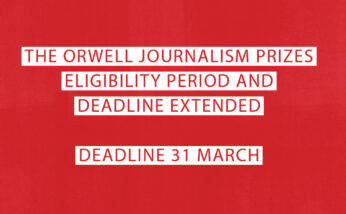