A brief summary of the Orwell Prize 2008 Launch Debate.

Heather Brooke was surprised at the prevalence of CCTV cameras in the UK compared to the US. As a journalist, she said, she always tried to ‘turn the camera around’ on to herself, but ‘as soon as you turn the camera onto the state, you find it completely obstructive’, and contrary to its own ideas of social control. Orwell’s The Lion and the Unicorn, still ‘the best way to understand the English’, argued that the worst thing one could be called was a ‘nosey parker’, which is exactly what the British state now is. She agreed that there is a great dependence on the state in modern Britain, and argued that this was harmful in terms of crime and antisocial behaviour; this monopoly of security led to an abdication of responsibility, with people not intervening in the street because they think to themselves, ‘but that’s the state’s role’. This compared unfavourably with the United States (Heather Brooke being half-American).

‘Will Not Have a Welfare State in 20 Years’

David Goodhart noted Orwell’s history of attacking the hypocrisies of the British left, which he felt was a good subject for an Orwellian critique today. He suggested that most libertarians were on the left, and wanted a huge social state – a ‘perfectly decent aim’ – but they were unwilling to give the state help to do this. This ‘help’, in his opinion, was the introduction of ID cards. ‘If the civil libertarian squeamishness gets to you… [such a state] simply won’t be able to happen.’ ID cards could act as an entitlement to services, a way of reassuring citizens worried about ‘free-riders’ on their taxes; while the practicality of such a scheme was undoubtedly a ‘big question’, there didn’t seem to be anything wrong with the principle. We make ‘massive demands’ on the state: ‘the state in return can reasonably ask for us to hand over some information about ourselves’. In any technologically advanced society, the state must be reasonably strong; Britain ‘will not have a welfare state in 20 years’ if they do not feel their information is safe. The ‘hugely disproportionate’ civil libertarian argument had been present in the ‘absolutely unjustified hysteria’ surrounding the loss of data from Revenue and Customs in the last ten days. Contrary to the malign and malevolent image often painted, the state is ‘essentially benign’ because ‘the state, ultimately, is people’. People’s rights are considerably better protected now than 15 years ago.

‘You Will Be Flagged Up as a Deviant’

Jenni Russell was troubled by the fact that it was those opposing ID cards who had to make their case, rather than those in favour of them. Proponents had to make the case because of the fundamental change in the relationship between citizen and state that would result. In the four main areas where ID cards were said to be beneficial, identity was not the problem: with terrorism, it was intention and not identity; with fraud, it was again intention, with only 2% of fraud occurring due to identity theft; with crime, it was proof and not identity that posed a problem for police; and viability remained a serious concern, with most experts saying there was no evidence that Britain would be able to operate such a complex computer system. Taking child protection and the ContactPoint system as an example, she said that the problem faced was one of getting people to do things and respond to crises, not information. She was concerned by the idea that information collection would solve problems: ‘I don’t see that it will improve business, or lives, or safety.’ Contrary to David Goodhart, she argued that the issue did not divide along party lines, but that ‘virtuous individuals’ of all backgrounds trotted out the line that they had nothing to fear because the state was essentially benign. This is ‘a very naïve view of the way power changes people’s behaviour’. After passionately relating a number of examples – the diabetic man having a fit on a bus in Leeds who was tasered and arrested, the M1 protesters this April whose homes were searched and property confiscated (and yet to be returned), the IPCC report into the de Menezes shooting – she suggested that databases would highlight anyone standing out in any way: ‘you will be flagged up as a deviant, because that’s what computer systems do’. ‘We cannot trust the government of the day to be the guardians of public morality.’

‘Beyond the Competence of the Government’

Nick Cohen was against ID cards primarily on the grounds of practicality: they are ‘beyond the competence of the government… they simply won’t be able to do it’. When similar information technology schemes had failed, they had affected those on the margins of society the most. He accepted that if ID cards worked, there would be many benefits, and that those wanting to implement the scheme were not wicked people, but were swept up in the IT industry: ‘Orwell would have mocked those who can’t see the difference between Gordon Brown and Joseph Stalin.’ The information that would be held had always been held: the fundamental, and worrying, difference with the proposed scheme was that all of this information would no longer be in separate piles, but in one system. If such a scheme failed, it would be affect, and be obvious to, everyone, and the trouble for the state was not that it was too powerful, but too incompetent. On CCTV cameras, he noted that, against all expectations, people had become more exhibitionist: strangely, the more information about us that is widely available, the worse we behave. Nick Cohen also warned against the temptation to ask, ‘what would Orwell think?’ By ‘robbing his grave’, we ignore the fact that Orwell, like all great writers, contains multitudes. Nevertheless, it was possible to see two sides of Orwell relevant to this debate – the first despising the susceptibility of the middle classes to ‘going along with’ totalitarianism, and the second the romanticism of English decency, even though this view as applied to the working classes had declined in recent years (‘in three generations, we’ve gone from the British working classes as being seen as the salt of the earth to them being the scum of the earth’). He did admit this, however: ‘I want ID cards to go ahead because it’ll keep me in work for years.’ 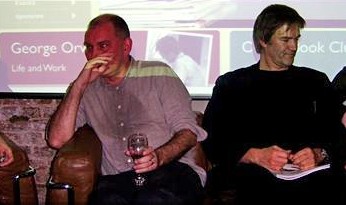