UPDATE: OWING TO THE BREXIT MEANINGUL VOTE IN PARLIAMENT, THIS FEATURE HAS BEEN POSTPONED UNTIL FURTHER NOTICE.

On Tuesday 12th March (today) the BBC’s The One Show will be screening a short film about when George Orwell met George Garrett, in February 1936 in Liverpool, when Orwell was researching The Road to Wigan Pier.

George Garrett, Merchant Seaman, writer, playwright and founder member of Liverpool’s Unity Theatre, was a radical activist who travelled the world and wrote a series of short stories, stage plays and documentary reports about poverty and struggle in the 1920’s and 30’s.

George Orwell, who was then researching his seminal work on poverty, The Road to Wigan Pier, was introduced to Garrett, who showed him round Liverpool, visiting the docker’s hiring stands and the new corporation housing, before Garrett dropped him off at Wigan Pier.

Orwell confessed to ‘being very impressed by Garrett’, even more so when he realised Garrett also wrote under the pseudonym also Matt Low, with more stories published than he previously realised. Orwell wrote:

I urged him to write his autobiography but, as usual, living in about two rooms on the dole with a wife (who, I gather, objects to his writing) and a number of kids, he finds it impossible to settle to any long work and can only do short stories. Apart from the enormous unemployment in Liverpool it is almost impossible for him to get work because he is blacklisted everywhere as a Communist.

Garrett, like many activists had flirted with the Communist party briefly, but was actually a lifelong syndicalist, having joined the Industrial Workers of the World, or The Wobblies, as they were better known, during his time in America in the early 1920s.

In his diaries Orwell wrote that while he was with Garrett, he ‘Bought two brass candlesticks and a ship in a bottle. G considered I was swindled but they are quite nice brass.’

In a very touching and fitting end to the day’s filming, Richard Blair produced the very ship in a bottle that Orwell had bought in Liverpool in 1936.

Orwell and Garrett never met again, but, inspired by Orwell’s advice and fired up by his view of The Road to Wigan Pier, Garrett did write his autobiography, Ten Years On The Parish. Sadly, it was never published in his lifetime, but, after being rediscovered in a suitcase by Writing on the Wall’s George Garrett Archive Project, Liverpool University Press published it in 2017, along with Garrett’s correspondence with his editor John Lehman as Ten Years On The Parish, The Life and Letters of George Garrett.

In 2011, following the success of the Webby Award nominated 1938-1942 diaries, The Orwell Foundation ‘post-blogged’ George Orwell’s Road to Wigan Pier diaries: follow Orwell’s progress in real-time as he confronts the poverty and deprivation of industrial England, a critical episode in his development as a journalist, social commentator and political writer.

Find out more about Garrett’s life and work at www.georgegarrettarchive.co.uk. 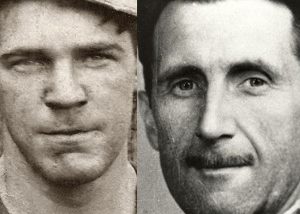