The Orwell Prize rewards the writing that comes closest to achieving Orwell’s ambition to ‘make political writing an art’. The winners will share the £3000 prize, which was presented today at a ceremony in Fyvie Hall at the University of Westminster.

The judges for the Orwell Prize for Journalism 2016 were Frances Cairncross, John Lloyd and Richard Tait.

Frances Cairncross, one of the judges, comments: “The winners demonstrate the very best of two distinct schools of journalism. Gideon Rachman, on the staff of the Financial Times, reflects with Olympian perception on the larger currents of the news, moving thoughtfully between continents and countries. Iona Craig is a freelance journalist, writing with immense courage about one of the least reported and most dangerous conflicts of our age. She has been one of the very few journalists to brave the conflict in Yemen and draw its horrors to global attention”

John Lloyd, a fellow judge, said “The Orwell Prize attracts much of the best political writing in the UK – of every kind. Iona Craig’s journalism is close textured, compassionate and campaigning, exposing the real consequences of the shrinking of socially funded justice. Gideon Rachman provides dispassionate and acutely observed views of the world’s large events, providing the reader with some orientation in a world undergoing rapid transformations”.

Rose Sinclair, Lecturer in the Department of Design at Goldsmiths, University of London, said: “It has become tradition for students from our department to design and make the Orwell Prize trophy. Tom, Archie and Panaigiotis have worked together to create something that resonates with the rhetoric of the George Orwell prize: creative, stylish, symbolic, a piece of art in its own right.” 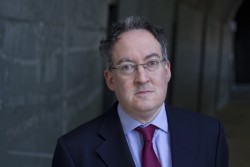 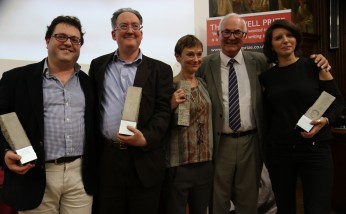