The Orwell Foundation is hugely proud of Orwell Youth Prize winner Jessica Johnson, whose story ‘A Band Apart’, about a dystopian future where an algorithm splits students into bands based on their background, has been widely praised as prescient following the fiasco surrounding this year’s A-level results. Interviewed by BBC Breakfast and Channel 4 News on Wednesday 19 August, Jessica, who wrote the story and won the prize last year, has described how she then discovered she had ‘fallen into her own story’ after her own results were downgraded, leading her to potentially miss out on a place at St Andrews to study English Literature and a scholarship, which was awarded in part on the strength of her extra-curricular achievements.

“We got told you can go wherever you want in life if you work hard enough,” Jessica said, “but we’ve seen this year that no matter how hard you worked, you got given a grade based on where you live.”

The Orwell Foundation’s Director Professor Jean Seaton commented: “Jessica saw into the heart of what the system represents and her story demonstrates the human ability which exams only exist to uncover. The story also shows the extraordinary value of literature and creativity in young people’s lives.”

Jessica’s dystopian story, ‘A Band Apart’, is available to read on the Orwell Foundation website.

Jessica’s story was chosen in 2019 by judge Caitlin Moran. The Youth Prize calls on a wide network of expert volunteers to read and sift young people’s entries (all of which are entitled to individual feedback before their final submission). That network has grown immensely this year, as over 1000 young people entered the prize during lockdown. This year’s winners, chosen by judges Kayo Chingonyi and Kerry Hudson, are also available to read online.

You can see a summary of the way Jessica’s remarkable story unfolded below. We are pleased to confirm that her place at St Andrews and scholarship have now been confirmed, following the government’s recent change of policy.

‘Orwell Youth Prize winner says she has “fallen into her own story” about an exam algorithm.’ 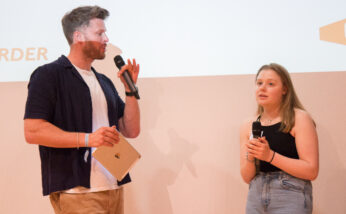