A few weeks ago, the Prime Minister said ‘for too long we have been a passively tolerant society, saying to our people: as long as you obey the law, we will leave you alone’.

In contrast, David Anderson QC, the Independent Reviewer of Terrorist Legislation, recently wrote ‘If it becomes a function of the State to identify individuals who are engaged in, or are exposed to, non violent extremist activity, it will become legitimate for the State to scrutinise, and for the citizen to inform upon, the exercise of core democratic freedoms by large numbers of law-abiding people.’

Meanwhile, we are told that new counter extremism bill will outlaw groups that foment hate; force public sector organisations to boycott those on the blacklist; slap extremism disruption orders on those seeking to radicalize young people, banning them from using electronic communications; let employers check whether someone is an extremist to ban them from working with children; and increase Ofcom’s powers to sanction broadcasters who transmit extremist material.

What is being targeted here is precisely not speech that is already firmly criminal, such as incitement to violence or murder, or to religious or racial hatred. What is targeted is non-violent, non-criminal behaviour. Or, as the Prevent Guidance addressed to universities puts it: ‘Vocal or active opposition to fundamental British values including democracy, the rule of law, individual liberty and the mutual respect and tolerance of different faiths and beliefs.’

This list might plausibly include much Platonic discourse, Marxist analysis of a supposed class basis for our rule of law, and many atheist deconstructions of religion. To the response that these forms of speech are not the ones the government wishes to target, we might ask: who is to say?

But free speech is also under pressure from a less expected quarter. The increasingly deranged no platforming policies pursued by a small but vocal minority of students, combined with demands for so-called’ safe spaces’ in which some young people in universities believe they should be protected from speech they find ‘offensive’ or, in that ghastly transatlantic phrase, ‘triggering’, could represent a real risk to the robust discourse and intellectual exchanges that are the lifeblood of institutions of learning.

Obviously this isn’t because there is any force or validity in the arguments of these young censors. It’s because the response to this posturing hasn’t always been sufficiently robust.

It seems to be a grave mistake for universities to collude in any way in the closing down of discussion, or to indulge a government that wants them to regulate, or even to ban, speech on campus that isn’t otherwise remotely criminal. Instead, the battle of ideas should be enthusiastically engaged.

And there is a lesson here for an appropriate response to the wilder aspects of the counter extremism bill: the best way to deal with extremist speech is rarely to stop talking.

To go back to the start, one might reply to David Cameron that, actually, ‘obey the law and we’ll leave you alone’ is a better stab at British values than anything to be found in his extremism bill.

Ken Macdonald QC is Chair of the Orwell Prize and Warden of Wadham College, Oxford.

This address was given at the Launch of The Orwell Prize 2016, on Wednesday 28th October 2015 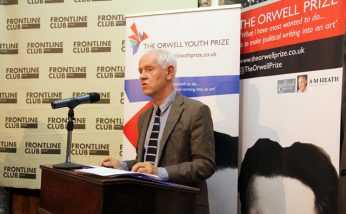