The longlists for The Orwell Prize for Journalism and The Orwell Prize for Exposing Britain’s Social Evils (sponsored and supported by the Joseph Rowntree Foundation) are announced today, Thursday 9th April. The 27 entries, across two longlists, span a wide range of publications, media and perspectives, from the local to the national, broadsheet to broadcast, commentary and investigative reporting. The journalism of 2019 is not of the past: this reporting exposes the fault lines we are living with today.

This is the sixth year that The Orwell Prize for Exposing Britain’s Social Evils has been awarded. The Prize is sponsored and supported by the Joseph Rowntree Foundation and is named in recognition of the task Joseph Rowntree gave his organization ‘to search out the underlying causes of weakness or evil’ that lay behind Britain’s social problems. The Prize has a unique remit to encourage, highlight and sustain original, insightful, and impactful reporting on social issues in the UK that has enhanced the public understanding of social problems and public policy, and welcomes reporting that uses investigative intelligence to pursue new kinds of story, ones that may also extend the reach of traditional media. The full longlist is:

We think any of the 13 entries would be a worthy winner. The quality of entries this year was exceptionally high, and very varied. In the end we decided that we would take our lead from George Orwell and originality had to be the most important judging criteria. In our longlist we have awarded stories that expose an issue you might not have known about, reporting that changed policy or attitudes, and entries that were based on a unique angle, or way of writing about a well-covered subject.”

The Orwell Prize for Journalism longlist 2020:

The Orwell Prize for Journalism is awarded each year to the commentary and/or reportage, in any medium, which best meets George Orwell’s own ambition ‘to make political writing into an art’. Independent of editorial agenda, the Prize is free to enter and accepts self-nomination. Journalists are listed alongside the publications written for in their submission. Each journalist is invited to submit three pieces for consideration by the judges. The full longlist is:

We were looking for journalism that’s independent of agenda, that serves the public rather than private interest, and that’s also written by journalists who are working against the grain, rather than with it. We have already found a whole load that combines accuracy, brevity, and above all in these murky times of ours, clarity. Choosing one of those above all the others that matches Orwell’s ambition to make political writing into an art, is going to be a gigantic task.”

Ben Fenton, Chair of Judges, The Orwell Prize for Journalism 2020

The journalism of 2019 is not of the past. We will live and die with the virus in the world that this reporting and thinking exposed. You need to re-read this work now because your future, your family’s, your community’s, everyone else’s future depends on understanding our recent history.

We depend on good government, and good institutions as never before. We hope that they, like us, can learn. The virus will rip through social and political structures, revealing their inequality, injustice, and lack of proper care and judgement. We face an unprecedented challenge. Some politicians, from all sides, have been shameless, but this journalism shows there are lessons waiting to be learnt.” 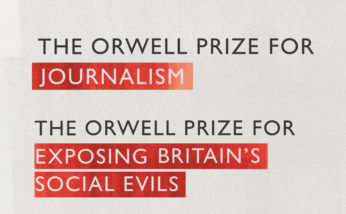