Judging panels announced as all Orwell Prizes, the UK’s most prestigious prizes for political writing, open for entries for 2022

The Prizes will also have a new Finalists format, revised eligibility period and a new Orwell Festival of Political Writing for July 2022.

The Orwell Youth Prize’s theme ‘Coming Up for Air’ will encourage entrants to write creatively and critically about the politics of the climate crisis.

The Orwell Prize for Exposing Britain’s Social Evils for reporting on social issues in the UK will be sponsored and supported by the Joseph Rowntree Foundation for the eighth time: entries are now open, and the judging panel will be announced in the new year.

All the prizes, including The Orwell Prize for Exposing Britain’s Social Evils, are now open for entries via the Foundation website.

From 2022 onwards, each Prize will announce a list of 8-10 finalists in late May/early June, from which winners will be announced in July. The finalists structure will replace the previous format featuring longlists of 12 and shortlists of 6.

The prize cycle will culminate in The Orwell Festival of Political Writing, held in association with University College London in July and featuring finalists from across the prizes, as well as other important voices in contemporary political writing and thinking.

About The Orwell Youth Prize

The Orwell Youth Prize 2022 is open for entries and invites young people in school years 8-13 to submit writing in response to the theme ‘Coming Up For Air: Writing the Climate Crisis.’

Inspired by George Orwell’s writing about our relationship with the natural world, this year’s theme aims to encourage young people to think critically and creatively about how the climate crisis affects the people, places and things around them, to look afresh at the way the environment is discussed and reported today, and to consider the changes they want to see.

The Youth Prize is also this year launching a new ‘target schools’ partnership scheme, working intensively with a group of highly-engaged teachers across the country at schools which meet our targeting criteria to help grow the Prize’s impact in their schools, and develop the programme for all students.

Youth Prize school workshops – lively, discussed-based events which introduce students to writing for the Prize and feature insights from professional writers – are available to all schools again this year, subject to availability, and we have free lesson plans for use in the classroom. Click here for more information about how teachers can get involved with the Prize.

The deadline for final entries is Friday 3rd June 2022, with winners announced in July at the Orwell Festival for Political Writing. All entries will be read by expert, volunteer readers, and all winners and runners up are published on our website, receive books by Orwell, and are invited to become part of the Orwell Youth Fellows programme.

The Orwell Prize for Political Writing 2022 panel is chaired by historian David Edgerton, and also comprises of Stephen Bush, politics editor at The New Statesman, Kennetta Hammond Perry, the Director of the Stephen Lawrence Research Centre at De Montfort University, and assistant editor at The Spectator Isabel Hardman.

The Orwell Prize for Political Fiction 2021 panel is chaired by the novelist Adam Roberts, who is joined by Dennis Duncan, writer, translator and lecturer in English at UCL, Sana Goyal, reviewer and associate editor of Wasafiri, and prize-winning author Monique Roffey.

The Orwell Prize for Journalism 2022 judging panel is chaired by journalist Isabel Hilton, and is also comprised of Marcus Ryder, visiting professor at the Lenny Henry Centre For Media Diversity and chair of RADA, Helen Hawkins, previously Culture Editor  at The Sunday Times, and Sameer Padania, who runs the independent consultancy Macroscope.

The judges for this year’s Orwell Youth Prize Prize are Nada Farhoud, Environment Editor at The Mirror, award winning poet, Gillian Clarke, Dara McAnulty, author of the prize-winning memoir Diary of a Young Naturalist, Dan Bernardo, video-game designer and founder of Playtra Games and Michael Jacobs, Professor of Political Economy at the University of Sheffield.

You can read more about all our judges on the Foundation website (click here for the Orwell Youth Prize) as well as review the rules and our criteria for judges. The Orwell Prize for Exposing Britain’s Social Evils for reporting on social issues in the UK will be sponsored and supported by the Joseph Rowntree Foundation for the eighth time: entries are now open, and the judging panel will be announced in the new year.

Submissions to the Book Prizes are now open. Full conditions for entry are available on The Orwell Foundation website.  Submissions will close on 28th February 2022, with final copies of books required 25th March 2022. The 2022 Prizes will award books published between 1st January 2021 and 31st May 2022. This is a one-off 17 month eligibility period, to allow the prize to transition to an annual eligibility period of 1st June to 31st May.

The Orwell Prize for Political Writing is awarded to a work of nonfiction. ‘Political’ is defined in the broadest sense. The Orwell Prize for Political Fiction, sponsored by A.M. Heath and Richard Blair, is awarded to a work of political fiction and includes YA, graphic novels and short story collections. Finalists will be announced in late May/early June, and winners will be announced in July at the Orwell Festival of Political Writing.

About the Orwell Foundation and The Orwell Prizes

The Orwell Foundation is a registered charity (1161563) providing prizes, cultural events and resources for the public benefit. Every year, the Foundation awards The Orwell Prizes, Britain’s most sought-after awards for political writing, to the work which comes closest to the spirit of George Orwell’s ambition ‘to make political writing into an art’. There are four prizes: for Political Fiction, Political Writing, Journalism and Exposing Britain’s Social Evils.

George Orwell (1903-1950) believed in the moral power of language and understood the dangers of its corruption. The Orwell Foundation uses his work to celebrate honest writing and reporting, uncover hidden lives, confront uncomfortable truths and to encourage all young people to think and write creatively and critically about the world they live in. The Foundation’s partners and sponsors include University College London, The Political Quarterly, Richard Blair, A.M. Heath and the Joseph Rowntree Foundation. Since 2016, the Orwell Foundation has been based at UCL, which is also home to the world’s most comprehensive body of research material relating to Orwell, the UNESCO registered George Orwell Archive

A.M. Heath, co-sponsors with Richard Blair of the Orwell Prize for Political Fiction, are the literary agents of the Orwell Estate.  Their clients have won innumerable literary prizes, including the Man Booker five times, the Carnegie, the Costa, the Women’s Prize, the Guardian First Book, the Somerset Maugham, the James Tait Black Memorial and The Orwell Prize. 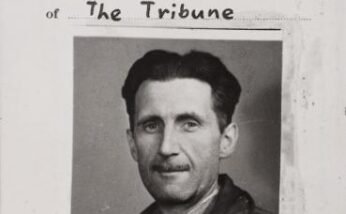