The Political Quarterly and the Orwell Foundation have teamed up to produce a series of exclusive interviews with female Orwell Prize winners and shortlistees. In the first interview, Anya Pearson speaks to the Observer and Guardian reporter Carole Cadwalladr, who won The Orwell Prize for Journalism for her investigation into the collapsed political consultancy Cambridge Analytica.

Cadwalladr has reported on alleged malpractice by the campaigners for Brexit, and the reputed illicit funding of Vote Leave, in the 2016 EU membership referendum. Before Cambridge Analytica closed operations in 2018, the company took legal action against The Observer for the claims made in Cadwalladr’s articles. She has also uncovered alleged links between Nigel Farage, the 2016 presidential campaign of Donald Trump and the Russian influence on the 2016 presidential election currently under investigation in the United States.

You can read the full interview on PQ’s brand new blog. 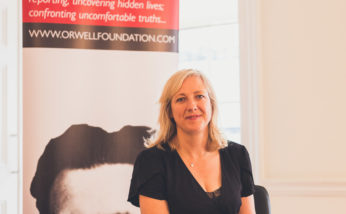