“Before we embark on the evening’s proceedings, I’m delighted to announce that the Orwell Prize has a new home- in the Institute of Advanced Studies at UCL. And I’d like to thank Professor Jo Woolf, previously Dean of Arts at UCL, and now of the Blavatnik School of Government at Oxford, for his role in securing this important and hugely appropriate association.

This move is particularly pleasing to us, not just because UCL already contains the Orwell Archive, but also because it is the university of Bentham and a great international, a great transnational institution. London’s Global University, as it nattily styles itself.

When Europe’s first university was established, in Bologna, in 1088, 200 hundred years before the University of Oxford, its origins were these: groups of young foreigners who came together in mutual aid societies for protection against city laws which imposed collective punishment upon them, as foreigners, for the crimes and debts of their fellow countrymen.

Having joined together in this way, these young men hired scholars from the city to teach them- and in time they decided to form a larger association, or ‘universitas’. A University.

It is perhaps because it was born in this way that the University of Bologna’s founding charter proclaimed the revolutionary principle that scholars should be free to pass without hindrance, they should not be oppressed by borders.

Of course this notion was both real and a metaphor, for if scholars were to be allowed to pass freely across Europe, then so too would ideas in their wake.

This idea, conceived in eleventh century Italy, now seems obvious to us. Today, it’s really quite impossible to conceive of a national university, except in vaguely sinister terms, just as it’s impossible to contemplate a national science without hearing ugly echoes from history.

So although my university, the University of Oxford, is situated physically in the heart of England, it is a European university. It is a world university.

In my College alone, 20 per cent of the undergraduates come from overseas, many, of course, from the European mainland. Around 65 per cent of our graduate students are also from abroad, and our fellowship is heavily international. This is the difference between Lysenko and Wittgenstein. And in the difference lies our protection against the evil, the anti-university evil, identified by Orwell himself when he wrote that if thought isn’t free, if the intellect is bound and national, if it is constrained and bordered, we live with the danger that any inquiry that is followed may lead to a forbidden thought.

It is quite mad to see incoming students from abroad as a symptom of a loss of control, or to believe that any control that’s lost by their arrival is worth mourning. To believe that foreign scholars amount to a problem, we’d have to imagine that the intellect they bring with them is somehow immigrant intellect, and less welcome for that reason. And that bad dream is accompanied by its own especially ugly historical resonance.” 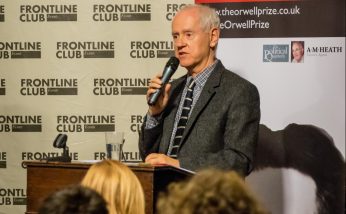