This newsletter was written by Dulcie Lee Last week the Orwell Prize visited The Green Dragon School in Brentford where our Operations Manager held a press conference for 60 nine-year-old delegates on the subject of A day in the life of a journalist. The room was packed with aspiring sports journalists, news reporters and foreign correspondents emerging with very interesting and thoughtful questions. Questions like; where does news come from, how do you start writing a feature, what kinds of different jobs are there for journalists to do and how do I become a journalist? Mr Veazey, the teacher who oversaw the morning, said “It was incredible to have The Orwell Prize visit, the children were so engaged and inspired. It made journalism real for them, explaining the ins and outs of the industry and they are desperate to find out more” After the press conference, the children were eager to discuss what they had learnt; one budding journalist said “I’m going to watch the news more often now!” and several decided they wanted to become a reporter. 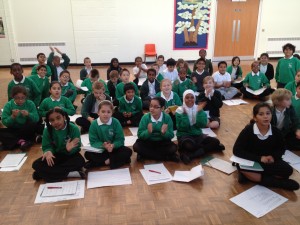 The nine-year-olds will be using the press conference to support a school project. Mr Veazey told us, “The children are now creating their own magazine, using some of the techniques that were discussed last week.” Only last month, during an episode of Radio 4’s Great Lives, Alan Johnson MP spoke to winner of the 2005 Orwell Prize for Journalism, Matthew Paris, saying “I wish I’d put Orwell on the national curriculum”. During the programme, Mr Johnson recalled purchasing Orwell’s Keep the Aspidistra Flying at age 14 and attributed it as the catalyst for his political awakening. During last year’s Orwell lecture, Alan Rusbridger, editor of The Guardian, also said “I’m pretty sure I wouldn’t have become a journalist were it not for George Orwell.”

The launch of the Orwell Prize 2013 – our 20th birthday year – will take place on the evening of Wednesday 24th October at the Frontline Club. There will be a launch debate as well as several exciting announcements about the Orwell Prize in 2013. To reserve your free place RSVP now to katriona.lewis@mediastandardstrust.org

Yesterday was World Homeless Day. Much of Orwell’s work focused on the working class and homeless people in society and in 1928 and 1929 Orwell wrote three articles as part of ‘An Inquiry into “Civic Progress” in England’. Two of the three articles were ‘A Day in the Life of a Tramp’ and ‘Beggars in London’ in which he discuss the timeless issues surrounding homelessness. Orwell’s experiences of homelessness in London and Paris would lead him to write his book Down and Out in Paris and London four years later. You can read the first chapter of Down and Out in Paris and London here. ‘Shooting an Elephant’, the essay in which Orwell explores an experience from his time in Burma, was broadcast on the BBC Home Service on 12th October 1948. The essay, which is available on our website, became one of a collection of Orwell’s works on Burma. As well as ‘A Hanging’, Orwell wrote several preliminary sketches on Burma that would later be used to form his book Burmese Days. You can read the first chapter of the Burmese Days here.

This week’s entries was published on 10th and 11th October 1942. Next week’s entry will be published on 15th October 1942. Don’t forget our other Orwell Diary blogs: his Hop-Picking Diary and The Road to Wigan Pier Diary. You can sign up to our newsletter If you’ve got any suggestions about our website(s), we’d love to hear from you – email us on katriona.lewis@mediastandardstrust.org. You can also follow us on Twitter and like us on Facebook. 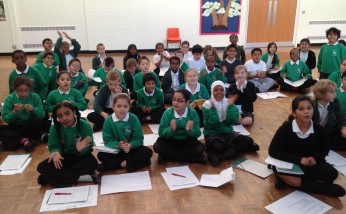