Today The Orwell Prize released an expanded events programme for 2017 in celebration of its move to UCL, announcing a series of lectures alongside its usual Prize events.

The Orwell Prize also announces a live public reading of Orwell’s Nineteen Eighty-Four, to be held in conjunction with UCL during the UCL Festival of Culture 2017, on 6th June 2017.

All events are free and open to the public.

Alongside it’s usual events programme – including the Orwell Prize Shortlist Debate and the Orwell Prize Ceremony – the Orwell Prize is delighted to announce additional events for 2017. The Orwell Prize is the UK’s most prestigious prize for political writing, and also a registered charity dedicated to the promotion of public understanding of and interest in politics. All events run by the Prize are free and open to the public. The Orwell Prize is based at UCL’s Institute of Advanced Studies, and is sponsored by the Political Quarterly, the Joseph Rowntree Foundation and Richard Blair.

“Next year we have an exciting menu: politics three ways. For the first time we are running three major lectures, each of which takes an Orwell theme and relates it to writing, politics and culture. And in June: come and be part of 1984 Live. Feel the resonances. In the original Ministry of Information, with Orwell’s own son, the political, literary, intellectual inheritors of the day and you, the people, reading 1984 all of a long summers’ day in London”.

Ruth Davidson is the leader of the Scottish Conservative and Unionist Party. Formerly a journalist and signaller in the Territorial Army, she was elected to the Scottish Parliament in 2011. Ruth Davidson will give a one-off lecture in 2017.

Josie Rourke is the Artistic Director of the Donmar Warehouse theatre. Josie is currently directing Les Liaisons Dangereuses starring Liev Schreiber and Janet McTeer at The Booth Theatre, New York following the sold out run of her production of PRIVACY, starring Daniel Radcliffe at The Public Theater, New York. She also directed The Vote which was live broadcast on More4 on Election Night 2015.

A. L. Kennedy has twice been selected as one of Granta’s Best of Young British Novelists and has won a host of other awards – including the Costa Book of the Year for her novel Day. She lives in London and is a part-time lecturer in creative writing at Warwick University.

The Orwell Lecture was founded by Professor Sir Bernard Crick and has been given annually since 1989. Originally held at Birckbeck, University of London and the University of Sheffield, the Lecture is now held at University College London, where the Orwell Prize is based, each autumn.

at UCL. In celebration of this partnership, and of one of the world’s most incisive and relevant writers, UCL and The Orwell Prize are delighted to present this unique event as part of the UCL Festival of Culture 2017: A live, start-to-finish reading of Nineteen Eighty-Four in Senate House, University of London.

For the first time in the UK, hear Nineteen Eighty-Four read by a host of actors, writers, journalists and members of the public over the course of a single day in the centre of London. This unique event, part of the UCL Festival of Culture 2017, will be free and open to the public.

George Orwell’s dystopian masterpiece Nineteen Eighty-Four was written in 1948, just before he died of tuberculosis in University College Hospital.  Senate House – where Orwell’s wife worked during the war – provided inspiration for the Ministry of Truth, which Orwell so chillingly depicted in the novel. Nineteen Eighty-Four has become perhaps the most pervasively influential book of the twentieth century. This unique event will offer the opportunity to hear Orwell’s seminal work read aloud in the building which inspired the literary world’s most fearsome building.

For further information or to get involved, go to https://www.orwellfoundation.com/1984live 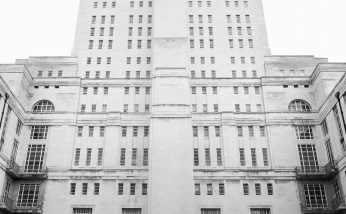