The Orwell Prize has announced its judges for 2017, and that it will now be based at The Institute of Advanced Studies at UCL, home to the Orwell Archive.

The Orwell Prize for Books 2017 will be judged by Jonathan Derbyshire, Bonnie Greer, Mark Lawson and Erica Wagner.

The Orwell Prize for Journalism 2017 will be Judged by Liz Forgan, Alan Little and Francis Wheen.

The Orwell Prize for Exposing Britain’s Social Evils 2017, which is sponsored and supported by the Joseph Rowntree Foundation, will be judged by Samira Ahmed, Claire Ainsley and Julian Le Grand.

Read more about the judges here

The announcements, which mark the start of an exciting new era for the Orwell Prize, were made at a debate to celebrate the launch of the Orwell Prize 2017 on ‘Experts, the Media and Politics’ featuring Jamie Bartlett, Ashwin Kumar, Christopher Snowdon and Polly Toynbee.

The Orwell Prize also announced that Ian Hislop will give the Orwell Lecture 2016 on Tuesday 15th November 2016.

“Arriving at UCL – home of the Orwell Archive – is an exciting moment in the development of the Orwell Prize. Orwell’s focus on the slipperiness of political language is particularly compelling in our own uncertain times, and this year’s Orwell judges will be unearthing a selection of the best, bleakest, most inspiring, most intelligent thinking in writing and journalism. The Prize depends on both the authority and variety of tastes that the judges bring to the process and this year we have a stellar collection. But the first thing we have to offer is one of the great public moralists of the moment, Ian Hislop, giving the Orwell Lecture 2017”.

Following the launch, the Orwell Prize 2017 will open for entries on Monday 31st October and will close on Thursday 12th January. 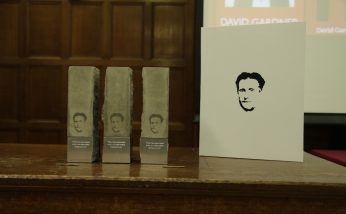