Last week The Orwell Prize returned from Burma where we hosted panels and took books to the Irrawaddy Literary Festival, the first international event of its kind in the country. The festival attracted crowds of around 10,000 over three days who came to listen to the work and thoughts of more than 120 local writers as well as a host of international participants including Jung Chang and the festival’s patron Aung San Suu Kyi. The Prize led three panels with past winner Timothy Garton Ash; Writing under Censorship and the Future of Free Speech, The Orwell Lecture and Witness of Violence. Two other prize winners – Fergal Keane and Robert Cooper – were also present throughout the event to participate and take in the occasion. The Orwell Lecture proved to be a huge a success, sandwiched between two talks from Aung San Suu Kyi, the ballroom was full of keen listeners to hear Timothy Garton Ash’s three lessons Burma should take from Orwell; “Remember room 101, look closely at the language politicians use and keep the crystal spirit.” Video footage of all the Orwell Prize events as well as Aung San Suu Kyi’s session with Dr U Thaw Kaung will be uploaded to our YouTube channel soon. The Orwell Prize Director, Professor Jean Seaton, chaired Garton Ash’s Orwell Lecture and gave Aung San Suu Kyi signed copies of Penelope Lively novels which the Lady particularly likes. 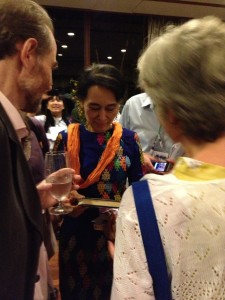 Buy a Book for Burma

The Orwell Prize’s Buy a Book for Burma campaign successfully delivered hundreds of copies of Animal Farm, Nineteen Eighty-Four and Burmese Days to the festival. Local bookseller Monument, were kind enough to manage a free raffle of the books bought by donors. Burmese nationals put their details into a pot and the names of up to thirty locals were called as winners hourly throughout the three day festival. Young people mostly picked Burmese Days whereas Animal Farm and Nineteen Eighty-Four were more popular with older participants. It was wonderful to see so many copies of Orwell all over the festival and we’re hugely grateful to all our enthusiastic donors as well as Penguin Books for providing the support that enabled us to do this. In addition to taking the Orwell titles to the festival several copies were delivered to Yangon libraries along with Orwell Prize winning Rule of Law by Tom Bingham.

During our time in Burma the Orwell Prize hired a local cameraman and shot a forthcoming ‘Orwell in Burma’ short film which will be screened at our annual shortlist event in April. Interviewees include James Byrne who edited the first collection of translated Burmese poetry, Bones will crow and poets from the anthology like Zeyer Lin and Pandora as well as Pascal Khoo Thwe and Jung Chang. We look forward to sharing this soon.

In Yangon we met the award-winning photojournalist Nick Danziger and best-selling author Rory Maclean who together led workshops with locals to help them develop their story-making skills through journalism, photography, filming and writing (where they found us our fantastic camera man). Their next exciting project is a joint book Back in the USSR – Heroic Adventures in Transnistria, a journey into a soviet time warp, which you can be part of by pledging support. Have a look at their video and maybe you’ll be tempted to join them for Transnistrian BBQ.

From elsewhere: on Burma 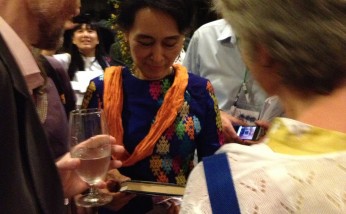