The Orwell Prize for Political Fiction 2021, sponsored and supported by Richard Blair and A. M. Heath, has been awarded to Summer by Ali Smith (Hamish Hamilton), the fourth and final book in her Seasonal Quartet. Written and published at great speed last year, Summer captures our time with great acuity, and is hopeful and furious in equal measure. Winter and Spring were previously shortlisted and longlisted for the prize, in 2018 and 2020 respectively.

The winner of the 2021 Orwell Prize for Political Writing is Between Two Fires:  Truth, Ambition and Compromise in Putin’s Russia by Joshua Yaffa (Granta). A series of beautifully-written pen-portraits of fascinating individuals – TV producers, priests, human rights activists and more – trying to thrive in contemporary Russian, many of whom are little-known to a Western audience, it is the Moscow-based journalist’s first book.

Both winners receive £3,000, and will be invited to take part in a winners ceremony later in the year. In videos released online today, both authors accepted the award virtually: Ali Smith recorded her piece in front of the Orwell mural on Southwold pier in Suffolk, while Joshua Yaffa dialled in from Moscow. Jean Seaton, the Director of the Foundation, said:

Like Orwell, both our winning authors this year are invested in the individual heart and minds’ negotiation with the pressures of their society: be it Britain heading into the 2020s, or the last two decades of Putin’s Russia. Joshua Yaffa has found an extraordinary new way of looking at Russian life, and the decisions and compromises made by those who want to make a difference, while Ali Smith’s ground-breaking project, her deft storytelling and sharp ear all make her a thrilling choice for this year’s Orwell Prize for Political Fiction. We are grateful to the careful work, and graceful discussions of the judges. And we also want to thank Richard Blair – Orwell’s son – for his generous support and interest in this prize.”

Ali Smith will be the special guest on BBC Radio 4’s Start the Week, 09.00AM on Monday 28th June. 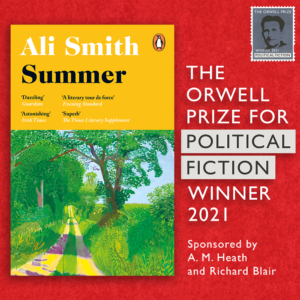 The judges for the 2021 Orwell Prize for Political Fiction are: Delia Jarrett-Macauley (chair), former winner of The Orwell Prize for Moses, Citizen and Me; Andrea Stuart, author; Bea Carvalho, head fiction buyer at Waterstones; and Mark Ford, professor at University College London and author. They said:

The conclusion to Ali Smith’s seasonal quartet seals her reputation as the great chronicler of our age. Capturing a snapshot of life in Britain right up until the present day, Smith takes the emotional temperature of a nation grappling with a global pandemic, the brink of Brexit, heart-breaking conditions for refugees, and so much more. It will serve as a time-capsule which will prove to be essential reading for anyone seeking to understand the mood of Britain during this turbulent time.”

Ali Smith, speaking next to the mural of Orwell at Southwold Pier in Suffolk, said the following about the news:

I am so happy to be awarded the Orwell Prize for political fiction.

Orwell’s fiction understands the acute difference between the politics of art and the artfulness of politics. His fiction demonstrates that the power of language is mighty, and that this might is life-changing, world-changing and world-forming; and that language wielded for political power alone will reduce us all to a kind of fodder for powers that be or powers that want-to-be, while the core power of art and of the arts is always expansive, dimensionalising, liberating, complex, and concerned with revealing the human condition and revitalising and re-empowering the human dimension.

“What I have most wanted to do” he said, … “was to make political writing into an art.”  The place where these two things meet can’t not be a place of humane – and inhumane – revelation.  To me, that’s what the word Orwellian means.  This, and that the structures of our arts, the shapes they take, will always make visible the structures by which we’re living, and who controls the language of the narratives we’re communally telling ourselves, and the workings of the narratives by which we’re being delineated as individuals and as a people.

That’s why the past and future visions of his fiction will always be timeless, and why the Orwell Prize for political fiction really matters.  Big thank you. 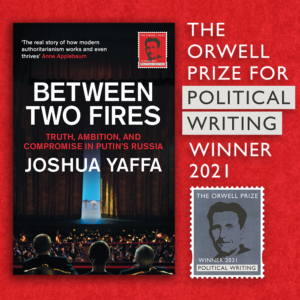 The judges for the 2021 Orwell Prize for Political Writing are: Anand Menon (chair), Professor of European Politics and Foreign Affairs at Kings College London; Angela Saini, award-winning journalist and broadcaster, and author; Richard Ekins, Professor of Law and Constitutional Government at the University of Oxford; and Rosemary Goring, author and columnist with the Herald and the Sunday Herald. Commending Between Two Fires, the judges said:

Joshua Yaffa sent in an acceptance speech from Moscow, where he is based:

I’m thrilled and honored to have won the Orwell Prize, an award that bears the name of an author who, perhaps more than any other, created a body of work that shows how one can write about politics with both clarity of thought and great humanity. That model was never far from my mind as I wrote Between Two Fires: I wanted to understand the dilemmas of compromise of the characters who form the core of the book, remaining clear eyed about their choices and the consequences of those choices, while also holding on to an empathetic reading of their lives and circumstances, oftentimes never quite sure whether I would have chosen or been able to act differently myself. The exercise of power and politics—especially in a place like Putin-era Russia—can complicate or scramble the pursuit of a noble, honest life, but life in all its beauty and strangeness remains all the same, even for those who make their own accommodation with the system. Orwell was a constant reference as I tried to untangle these stories and tell them with lucidity and, I hope, a measure of literary artistry.

The shortlists, announced last month, featured thirteen writers working across different genres and forms to explore, confront and articulate the political challenges of our time, taking in reportage, nature-writing, history, experimental fiction and thrillers, and ranging across the world, from a Cumbrian hill-farm to a town in South-eastern Nigeria, and from the American Deep South to Ngaba Sichuan. The full list can be seen here.

The Orwell Foundation also today revealed that the Orwell Prizes will return this autumn in a new format, with plans for an ambitious live event series in 2022, and a revised system of finalists and winners to replace the current longlist to winner structure, with the aim of achieving greater impact for the writing and reporting which comes through the prizes. More information will be announced in the autumn.