We can now reveal the finalists chosen by The Orwell Prize judges to go through to this year’s shortlists. The winners of each Orwell Prize will receive £3,000 and will be announced on Thursday 14th July 2022 at the closing ceremony of our Orwell Festival of Political Writing, in association with Substack and UCL.

The Orwell Prizes have a new structure for 2022, with a winner being chosen from a single shortlist of finalists, rather than the previous longlist-shortlist-winner structure. The Orwell Festival will bring together the shortlisted writers for The Orwell Prizes 2022, along with some special guests, in a series of events to discuss the most important and exciting political thinking and writing today. Head to the festival’s website to book your tickets.

As ever, The Orwell Prizes aim to encourage good political writing and reporting aimed at or accessible to the reading public. Winning entries should be of equal excellence in style and content, and the writing should be in the spirit of George Orwell’s own ambition ‘to make political writing into an art’. Congratulations to all this year’s nominees, and a huge thank you to our panels.

The Orwell Prize for Political Fiction 2022

The judges for The Orwell Prize for Political Fiction 2022 are: Dennis Duncan, writer, translator and lecturer in English at University College London; Sana Goyal, writer and deputy/reviews editor at Wasafiri; Adam Roberts (chair of judges), novelist and Professor of Literature at Royal Holloway; and Monique Roffey, writer of novels, essays, literary journalism and a memoir.

Adam Roberts, Chair of Judges for The Orwell Prize for Political Fiction 2022, commented: ‘This is a markedly varied list, something that reflects the diversity and variety at the very top of contemporary writing: from the distilled clarity and precision of Small Things Like These to the stylistic and formal fireworks of Sterling Karat Gold, from the capacious energy and verve of there are more things to the sharply focused vignettes of contemporary life of Assembly; from the sharply witty gaelic tale of island life and colonisation in The Colony and the feminist science fiction of Cwen to The Appliance’s Philip-Dickian fantasia on technology and authenticity; from the searching and fluent A Passage North, exploring how the traumas of the past stir the present, to the climate-changed collapsing future of The High House. What all these brilliant novels have in common, and what so impressed the judges, was the various ways they explored the politics of everyday life: personal, racial, linguistic, familial, environmental. They are all, in their ways, political novels, and all, without exception, superb.’

We would like to thank A. M. Heath Literary Agency and George Orwell’s son, Richard Blair, for their sponsorship and making the fourth year of The Orwell Prize for Political Fiction possible.

The Orwell Prize for Political Writing 2022

The judges for The Orwell Prize for Political Writing 2022 are: Stephen Bush, columnist and associate editor at the Financial Times; David Edgerton (chair of judges), Hans Rausing Professor of the History of Science and Technology and Professor of Modern British History at King’s College London; Kennetta Hammond Perry, founding Director of the Stephen Lawrence Research Centre and Reader in History at De Montfort University, and Anne McElvoy, broadcaster and is Senior Editor of The Economist.

‘Each of our shortlisted books changes our minds on something important, and does so compellingly and with a sense of urgency, peering beneath surface appearances, encrusted as they are with apologias, cliches and mendacities. Taking in reportage, essays, historical writing and economics, and ranging from the earliest human cultures to hugely important contemporary problems, they all rise to the challenge of our times which is not to speak truth to power, but to tell the truth about power.’ – David Edgerton, chair of judges, Orwell Prize for Political Fiction 2022

The Orwell Prize for Journalism 2022

The Orwell Prize for Journalism 2022 panel is chaired by Isabel Hilton, journalist and founder of China Dialogue, who is joined by Helen Hawkins, ex-culture editor at The Times, Marcus Ryder, Head of External Consultancies at the Sir Lenny Henry Centre for Media Diversity and chair of RADA, and Sameer Padania, author and independent journalism consultant.

Generously sponsored by the Joseph Rowntree Foundation, Sophia Parker, Director of Emerging Futures and founder and former-CEO of Little Village, chaired this year’s panel of judges. She was supported by Annabel Deas, investigative journalist at BBC Radio 4 and winner of The Orwell Prize for Exposing Britain’s Social Evils 2021, Jo Swinson, Director of Partners for a New Economy and former Leader of the Liberal Democrats, Kirsty McNeill, Executive Director for Policy, Advocacy, and Campaigns at Save the Children, and Sophia Moreau, a multi-award winning campaigner and Head of Advocacy at Little Village.

This is the fourth year that The Orwell Prize for Political Fiction, sponsored by the Orwell Estate’s literary agents, A. M. Heath, and Orwell’s son, Richard Blair, has been awarded. The prize rewards outstanding novels and collections of short stories first published in the UK that illuminate major social and political themes, present or past, through the art of narrative.

The Orwell Prize for Political Writing (previously, Orwell Prize for Books) is for a work of non-fiction, whether a book or pamphlet, first published in the UK or Ireland. ‘Political’ is defined in the broadest sense, including (but not limited to) entries addressing political, social, cultural, moral and historical subjects and can include pamphlets, books published by think tanks, diaries, memoirs, letters and essays.

The Orwell Festival of Political Writing

The Orwell Festival of Political Writing, in partnership with Substack and in association with UCL, will run between 22nd June and 14th July across Bloomsbury and bring together the shortlisted writers for The Orwell Prizes 2022, along with some special guests, in a series of events to discuss the most important and exciting political thinking and writing today. We have already announced events with Rebecca Solnit, Dominic Cummings, Joshua Yaffa, and Ali Smith, with many more speakers to be announced shortly.

The Foundation would like to thank all our partners and sponsors, including the Joseph Rowntree Foundation, Richard Blair, A. M. Heath, The Political Quarterly, and University College London, home of the Orwell Archive, for their support in continuing to make these awards possible. 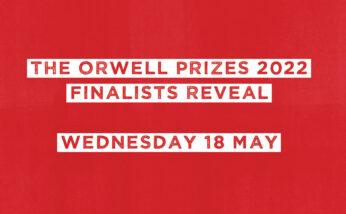