This is a guest post by Toby Harnden, winner of the 2012 Orwell Prize for Books 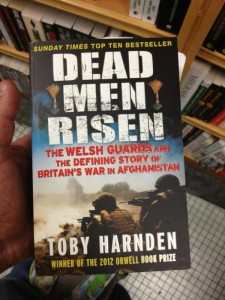 In his essay of self-examination ‘Why I Write’, George Orwell wrote that “All writers are vain, selfish and lazy, and at the very bottom of their motives there lies a mystery”. Somewhat contradicting the lazy part, in the following sentence he describes the act of writing a book as a “horrible, exhausting struggle, like a long bout of some painful illness”. He was right, of course, that writing a book is not the effortless joy that some might imagine. At times I viewed writing Dead Men Risen as akin to wrestling with a large, slippery monster. On some occasions, it seemed like the pursuit of a quarry I might never catch. Towards the end, it was a test of sheer endurance. And after it was written dealing with a Ministry of Defence determined to gut it or bar it from publication was like a small war, complete with trenches (the offices of Quercus), comrades in arms (the Quercus CEO and his senior staff) and even a little espionage being conducted by either side. But alongside the pain, there is also the sheer pleasure of writing something that will be permanent, of gathering information that might otherwise have been lost in time, of recording how things were in order to prevent them being distorted for propagandist or other purposes. The question of why an author writes a particular book is always instructive. As Orwell argues, there is likely to be a mixture of public-mindedness and ego. Some books are written simply for the money, others as an act of vanity. A few could have been produced by Orwell’s Ministry of Truth in 1984. There are political books written in Washington DC these days by teams of ghost writers at PR firms churning out chapters to a preordained agenda. One of the questions about Dead Men Risen I hadn’t anticipated was one I have frequently been asked: “Why did you write it?” As with most people asked a particular question again and again, I developed an answer. The reason, I said, was that it was to honour my friend Lieutenant Colonel Rupert Thorneloe, the Welsh Guards commanding officer who was killed in action in Afghanistan. And it was because various people told me that the story of the Welsh Guards in Helmand needed to be told. In answering, I stressed external factors, as if acting on these made my motives more respectable. My answer was truthful but it was far from the whole truth. The book needed to be written but, equally, I needed to write it. Looking back (I finished the manuscript nearly 18 months ago), Dead Men Risen was a book that had been in me for almost as long as I could remember.

Recently, leafing through some old childhood drawings and writings kept by my parents, I came across a picture of a battle between ‘Great Britain’ and ‘Germany’ in which I had totted up the ‘dead men’ on each side. I also found a work entitled The Cry of Death: The Adventures of Nigel Murphy – my first book, written when I was about seven. War stories and military service fill my memories of childhood. On my mother’s side, all three services were represented – her brother had been in the RAF, her brother-in-law in the Army and my father in the Royal Navy. My grandmother’s cousin, who we would see, had suffered terribly in a Japanese Prisoner of War camp. I remember him pottering around in his garden; we had been told to keep our distance because he had been very badly affected by his experiences. My paternal grandfather had joined the South Wales Borderers with the rank of Boy in the 1920s and retired as a Major three decades later. His father had been a Sergeant in the Royal Berkshire Regiment, serving in the Nile and Egypt campaigns of the 1880s. My grandfather would often bring out an old box and show us his array Second World War medals and the Egypt Medal and Khedive’s Star awarded to his father. Also in the box was a silver identity bracelet that my grandfather had taken from a dead soldier he had found in the desert in North Africa. After the war, he had tried to find his wife, without success. Around the same time, I remember watching a film about the D-Day landings and following a tiny figure storming the beach until he was shot and fell. I then followed another until he too fell. And another. Each man, I reflected, had been a child like me, with a family and a bedroom and things he liked to do. But in an instant, he was dead and anonymous. After leaving school, I followed my father into the Navy and, like him (neither of us got any medals), I never saw active service. I joined three years after the Falklands and, despite my best efforts to get involved – I have a letter chiding me for my excessive zeal in seeking to desert my shore billet for one in Kuwait or Saudi Arabia – the US-led coalition was able to win the Gulf War without me. I’ve seen a lot more war as a journalist than I did in a decade in the Navy. If I’m honest with myself, reporting on wars, and writing Dead Men Risen, has been partly a substitute for not having been a combatant myself. And my childhood fascination with war (and journalism – I would publish my own newspapers with a printing set and pin them up at school, inviting much derision from my peers) led fairly directly to much of what I have done as an adult. So perhaps I should come up with a new answer as to why I wrote Dead Men Risen. Yes, there were those external impulses. And I certainly wanted to know how Britain’s latest Afghan war being prosecuted and whether it was worth it, as the politicians and generals kept asserting in the affirmative. But I also wanted to tell a story about the reality of war and the men who fight it. In the end, Dead Men Risen wasn’t all that different from my counting up those dead Germans and penning The Cry of Death all those years ago. You can sign up to our newsletter. If you’ve got any suggestions about our website(s), we’d love to hear from you – email us on katriona.lewis@mediastandardstrust.org. You can also follow us on Twitter and like us on Facebook. 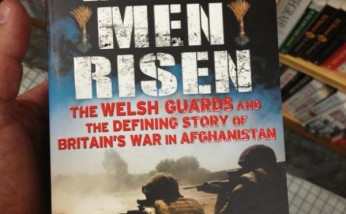