Following a sell-out international tour, the five-star smash hit production of Orwell’s masterpiece 1984 is back in London from 14 June. We’re now offering followers of The Orwell Prize the chance to win 1 of 3 pairs of tickets to see this acclaimed adaptation of the definitive dystopian novel. April, 1984. 13:00. Comrade 6079, Winston Smith, thinks a thought, starts a diary, and falls in love. But Big Brother is always watching. Orwell’s ideas have become our ideas; his fiction is often said to be our reality. The “definitive book of the 20th century” (The Guardian) is re-examined in Robert Icke and Duncan Macmillan’s radical and much lauded staging exploring surveillance, identity and why Orwell’s vision of the future is as relevant now as ever. 1984 Playhouse Theatre Limited season from 14 June – 3 Sep 2016 www.1984theplay.co.uk To enter, visit www.hotticketoffers.com/competition/1984theorwellprize and enter the code ORWELL. The competition closes on Fri 3 June at 5pm. Good luck! 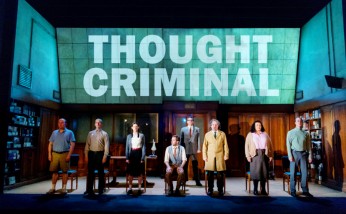