We are delighted to announce that writer Caitlin Moran is judging this year’s Orwell Youth Prize, the theme of which is ‘A Fair Society?’.

Following Orwell’s example, entrants of the prize are encouraged to draw on their own experiences of the world around them and write in language that is clear, concise and compelling for their audience. The form the writing takes is up to the writer, previous winning entries have included poetry, prose, journalism and short stories. Moran will judge both the junior (aged 12-16) and the senior (sixth-form) categories of the prize and the winners will be announced at the annual Celebration Day on the 5th July.

Moran’s work has often drawn on her own childhood and teenage experiences with humour, wit and integrity and the youth prize is excited to have her on board with this year’s competition. 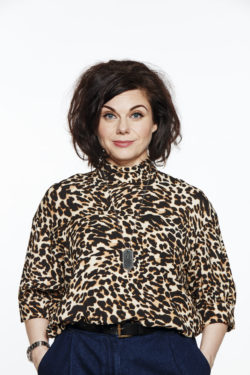 ‘If you don’t come from the “right” background or school, it’s hard to know how to break into writing as a career. Who do you talk to? How do you apply?  That’s why I’m delighted to judge this year’s Orwell Youth Prize – as my career started when I entered a writing competition, at the age of 15, so I know just how life-changing awards can be. It might not feel like it, but there really is a whole industry waiting to discover new voices. Please – write something. Show us what you’ve got.’ Caitlin Moran

Caitlin Moran wrote her first novel, The Chronicles of Narmo, at the age of fifteen. She has worked for The Times since she was eighteen as an interviewer, TV critic and columnist including, in the most-read part of the paper, the satirical celebrity column ‘Celebrity Watch’. She has won the British Press Awards’ Columnist of The Year, Interviewer of the Year, and Critic of the Year. Her bestselling memoir, How to be a Woman, won the National Book Awards Book of the Year, was an instant New York Times bestseller, and is published in twenty-five languages. The film of her novel, How to Build a Girl, produced by Channel 4 and Monumental Pictures, will be released later this year. With her sister, she co-wrote the Channel 4 sitcom Raised by Wolves. She has published two bestselling collections of her journalism, Moranthology and Moranifesto. Caitlin Moran’s latest novel, How To Be Famous, was a number one bestseller on publication in 2018. She is published by Penguin Random House in the UK and HarperCollins in the US.

Caitlin isn’t her real name. She was named Catherine. But she saw ‘Caitlin’ in a Jilly Cooper novel when she was 13 and thought it looked exciting. That’s why she pronounces it incorrectly: ‘Catlin’. It causes trouble for everyone.

About the Orwell Youth Prize

The Orwell Youth Prize is an annual programme for 12-18 year olds culminating in a writing prize. Rooted in George Orwell’s values of integrity and fairness, the prize is designed to introduce young people to the power of language and provoke them to think critically and creatively about the world in which they are living.