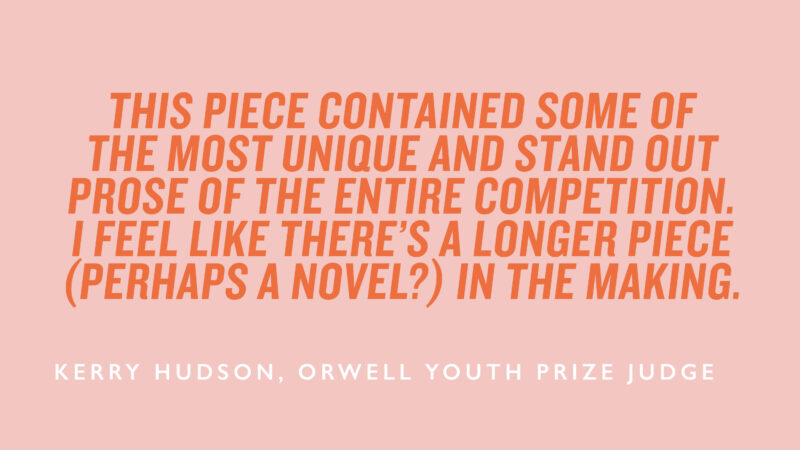 Extract from ‘The Michelin Woman’, by Sophie Ritchell

I gave in that week. Signed up for TT. Call me a pushover, hell, maybe I was. But you kind of get used to being pushed over when you’re on the streets. It’d become second nature.

Two days in, and I’d pretty much adjusted to it. Her. Rhoda. The way she worked, the fact she squirmed if someone ate crisps too loudly next to her, how she saw old school teachers in the faces of cars. She reminded me of a character in some popular Brit Flick, the sort of person that Empathy Grant would win a Bafta for playing.

It didn’t really click that we lived in the same universe until that afternoon.

Rhoda wouldn’t give it directly to him, couldn’t trust someone like that with a couple of quid, might spend it on drink, drugs, whatever, but Greggs did steak bakes and sandwiches, and she could just nip in, the Deliveroo guy wasn’t coming until quarter past anyway so she had ten minutes.

She landed on a bean and cheese pasty in case he was veggie, which was sweet. Shame Pops was lactose intolerant, but no-one thinks to ask about that sort of thing, and he was always chuffed with anyone’s donation, even if it meant he spent the following night barfing it up behind the recycling bins.

Wish I was as nice as Pops.

We called him Pops because he had grey hair and someone said he used to live in Boston, and that was why he sounded like he was pinching his nose when he asked for change. Never asked him if it was true though. That back of the roof of the mouth ‘a’ could have just been untreated dysphagia.

Pops was one of those guys who you kind of just like. We met at St Joseph’s Soup Kitchen on Radford Av, and – I swear I’ll never forget this – as soon as he saw me, his chest started to heave up and down like he was lugging a sack of baking potatoes around in his rib-cage, and he started to hiccup. A bit of me thought maybe I looked so bad I’d given him a heart attack or something (crazy, I know, but my brain had sort of turned to mush by this point). Anyway, turned out he was cracking up, cracking up over my white puffer coat. Said he’d always wanted to meet the Michelin Man in person, shame he had to go for his female counterpart, but beggars couldn’t be choosers. And so I got my name.

Pops was better than WikiHow, told me to tie my backpack with a piece of string and wear it back-to-front when I went to sleep so I didn’t have to learn the hard way, and that job interviewers stop paying attention when they get wind that you have no fixed address. Lent me cash once when I couldn’t afford tampons, and never stopped making that gag about BGT and the purple buzzer once he figured it made me laugh. That sort of thing meant a lot back then. A whole lot.

It killed me that Rhoda had absolutely no clue.

She gave Pops the pasty and headed down the road to the block of red brick flats next to the Jolly Taxpayer. Her sister, Andi, had that day become legally able to watch Alien and The Walking Dead, and was sat with her mum in the front room opening every birthday card like a book and flicking through the orange pages inside. Seemed everyone had learnt from their mistakes on Rhoda’s fifteenth six years ago and steered well clear of the pink unicorn slippers or sex toys (their granny had always been a bit wild).

They knelt on the carpet and scrapped over who got the biggest slice of pizza, which was plonked in the middle of them, sagging into its biodegradable packaging like a round table missing the good old days of chivalry. Rhoda knocked her unwanted olives all over the floor and had to spend the next ten minutes leeching the stains out with a wet tea-towel (they couldn’t find the sponge). Andi didn’t help. Cleaning up other people’s leftovers every Saturday was enough, she didn’t need to get rid of her sister’s muck too. Then, when it got to seven, she grabbed her purse and made for the door, ducking out of the way of her mum’s slobbery goodbye kisses. Party. Friend’s house. Back by eleven.

At eight Rhoda and her mum watched a rerun of Avatar 4. At half ten, Rhoda went to bed.

It was two when she woke up again; someone was choking on swear words. She flumped out of her mattress and shuffled along the corridor to the kitchen door.

Her mum, back against the wall, had sunk down into a stool and was scraping words out of the sobs in the bottom of her throat.

“How did she get hold of them?”

Someone shifted slightly, and through the frosted glass Rhoda could now see the navy blue of a policeman’s uniform next to the breakfast bar.

“Friend bought them. She paid him back – birthday money, was it?”

Her mum swore again and sunk further down, leaving marks above her where the shaking curve of her spine had rubbed the paintwork raw.

Oh, man. Her face at that moment. A skull vacuum-packed in red plastic and two ping-pong ball eyes that had forgotten to blink.

“She’s in hospital now. They’re assessing the possibility of other hallucinogens too, but if she’s clear, the medical advisor thinks it won’t be too long till she’s out.”

“There’ll be other consequences though.”

“Of course there’ll be other consequences – they’ve been playing heavy metal in my head for
the past half hour! Do you think I’m stupid? They fucking killed someone!”

At this, Rhoda swore and went in.

The Thursday after, myself again, I went back to St Joseph’s. It was snowing, and those of us without a place at a shelter had turned sort of grey, like the slush you sometimes get trying to stuff itself down the neck of the gutter. I got talking to Rocky in the queue, said I was counting down the seconds till Pops came up to me and asked if I sold winter tyres (it was a running joke). He looked at me like I’d just kicked a dog.

I was dumbfounded. “What the hell?”

“What the hell? What is wrong with you? It’s been six days since some fucking off their heads teenagers beat Pops to a pulp, and it’s okay to make jokes about it now, is it? That’s sick.”

Sophie Ritchell is a human rights activist and writer. She was the first candidate to undergo Temporary Transplantation in 2057, when she was transferred into the mind and body of Rhoda Hatherford (now Johnson-Smith). Following this, she has become a formidable advocate for the campaign against addiction among vulnerable young people, speaking in schools, colleges and youth organisations across the UK. Her firm conviction in the power of empathy to bring about fundamental social and political change has led to her uniting with millions of others in championing the adoption of TT on a global scale.

Five years ago, a Quiri investigation reported that since the transplantation process became common practice in the late seventies, it has eradicated worldwide discrimination, conflict, poverty and preventable causes of illness. It was also one of the key reasons for the termination of climate change. Without it, we would not be able to live and breathe today.

This piece contained some of the most unique and stand out prose of the entire competition. I feel like there’s a longer piece (perhaps a novel?) in the making. Kerry Hudson, Orwell Youth Prize Judge

“Hugely enjoyable, clever, multi-layered, lying in wait to entertain you on every level.The Michelin Woman draws you into its world and story with affecting language, vivid characters, and dialogue; it makes you look, listen, think, genuinely care, before springing a completely unexpected final trick on the reader. Playing with the format of the competition itself, this story reads you. I loved it.”  Nicola Baldwin, Playwright and Scriptwriter

Naomi Thomas is a senior Orwell Youth Prize 2020 Runner Up, responding to the theme ‘The Future We Want’.