To the boy who’s considered my equal 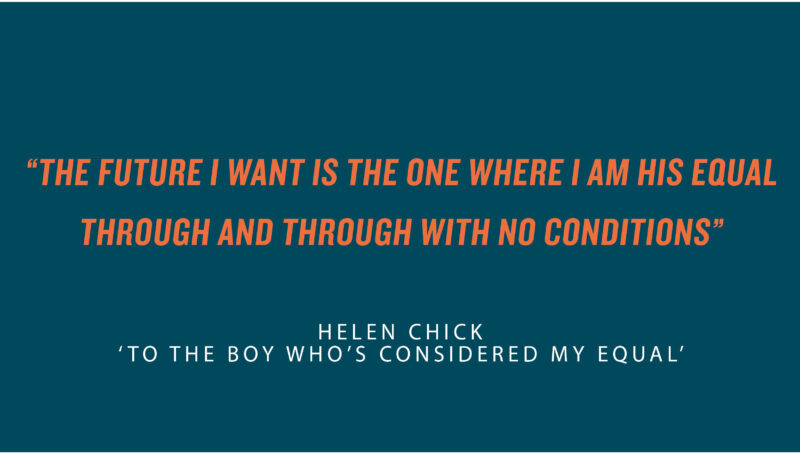 When I was 5, you told me I threw like a girl

Meant to make me feel as though I was beneath you

Because my reproductive system was different to yours

Because you liked me

That nothing would be done to stop it

Because boys will be boys

Told I was rude and unladylike

That the only thing that made me special

Was how closely I was to “perfect”

When I was 10 they told me about sex

That it was only used to conceive

That my body was built for childbirth

And my purpose to reproduce

But if I didn’t want that

That I had no use

When I was 12 I started to bleed

But they told me I couldn’t talk about it

Because it would make you uncomfortable

And your comfort was more important than mine

Because while I bled and cried because of the pain

Because it would distract you

And you couldn’t possibly control yourself

So while you lapped up knowledge in our classroom

All comfortable and focused

I sweated, cloth covering every aspect of me

Because it was my responsibility

To keep your eyes off my body

When I was 14 they told me to change

Because boys wouldn’t want me if I stayed the same

They told me to make more of an effort, to be slimmer

To give you my whole undivided attention

But never expect the same in return

Because you had a future to work for

And apparently I didn’t

When I didn’t want you to that I was frigid

They asked what I was wearing, what I said

And when I explained what happened

They looked me in my desperate eyes, yearning for help

And they told me not to do anything

Because this would ruin your future

As if it hadn’t already ruined me

Now I’m 16 and they have the audacity

To tell me I’m equal to you

And most importantly I don’t need feminism

Because boys won’t ever want to be with a feminist

The future I want is one where

One where the system isn’t stacked against me

One where people will listen to me as their equal

One where saying no won’t potentially get me killed

The future I want is one where I am his equal

Through and through with no conditions

This was a poem that knew exactly what it wanted to say – focussed, intelligent and passionate.” Kerry Hudson, Orwell Youth Prize Judge

What a tough, and in the real Orwell way – uncomfortable poem. It is sharp and beady and comes with a distinct voice. Yet it identifies the contradictions and double-binds that girls and young women have to navigate still. It is impressively controlled and that tightness of form nevertheless gives a shape to a pent up energy and calculating intelligence. A very accomplished piece of work expressing real analytic and emotional ability.” Jean Seaton, Director of the Orwell Foundation

‘To the boy who’s considered my equal’ is a junior Orwell Youth Prize 2020 winner, responding to the theme ‘The Future We Want’.