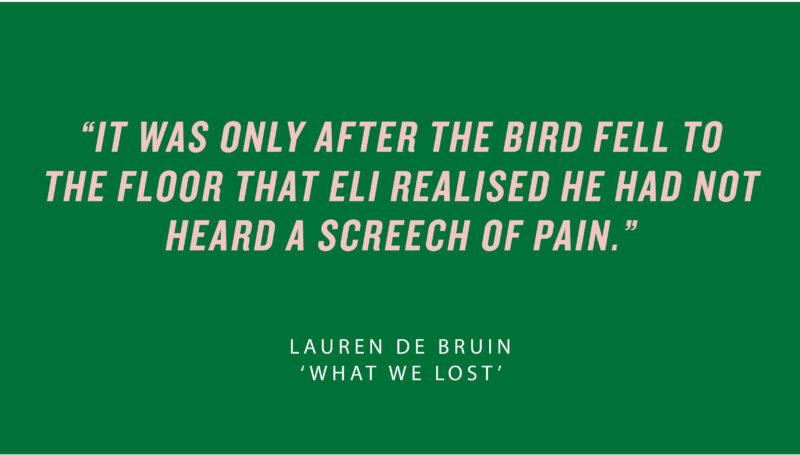 The count down on Eli’s hour of state-allotted outside time started the moment he slammed his front door. A familiar wave of February heat warmed his fair skin as he ran towards the yard to meet Gabriel and Emilia, who were waiting for him to provide what was left of their now rather worn football. Eli had left the flat clad only in Nike basketball shorts, a no longer very white t-shirt, and a pair of beat-up trainers; all thrifted from the Republic’s charity shop in town. He was out of breath by the time he reached the wired fences of the yard, his CO2 smothered lungs straining against the increased activity. The rays of sunlight that had been kissing freckles onto the creamy expanses of Eli’s skin quickly became more forceful; leaving their fingerprints around his neck. Causing the pale birthmark on his forehead to burn white-hot against the red glow.

The yard was the centre of the community. A large expanse of concrete encircled in wire mesh. Two of the metal posts securing the fence were used as one goal by Eli’s friends and two of the larger bloodstains on Judas’ Wall marked the other. The yard was where most of Eli’s school mates met up from 2:00-3:00 pm at the weekend but during the week it was reserved for the Republic’s drills, punishments, and Youth Corp’s training. Eli had just reached the age where citizens were required to watch the executions and had witnessed his first on the afternoon of his eighteenth birthday. The unfortunate pair facing execution had been a husband and wife who broke the Republic’s decree that restricted each couple to one child in an attempt to curb the over-population of the state. The availability of food and water was scarce across the parched lands of the UK and in the ever more frequent periods of drought the Republic reduced the rations further. These meagre resources were exacerbated by the surplus population that had flooded in from areas like Australia and Bangladesh (that were now either constantly on fire or underwater.) The Republic promoted the “an eye for an eye” philosophy and whilst both children were permitted to live, the couple would be sentenced to death. The woman’s stomach was still protruding from her recent pregnancy and she pressed her palms against it; whether this was out of habit or to stop her hands shaking Eli was not sure. A woman with a greying bob and a large patchwork handbag that had jabbed into Eli’s hip had told anyone who would listen that the couple had kept the baby locked up in a basement for a fortnight. Eli tried to block out her nasally words. If he closed his eyes he could almost feel seagrass tangling around his ankles and cool waves rippling over his scorched skin. The Youth Corps lined the yard, hands hovering over their rifles in case of insubordination from the crowd or from the couple that was led to Judas’ Wall by the firing squad. The lower half of the squad’s faces were concealed behind rags to ensure their identity remained unknown. Two of the lieutenants had blindfolded the couple with strips of discarded material before stepping back to join the squad who had lined up their rifles with the target marks hastily drawn in the centre of the couple’s foreheads. Eli swallowed the bile that blistered the walls of his throat and forced his eyes open whilst the man scrambled blindly for his wife’s hand. “Ready!” called the squad leader. The man seemed to deflate when his fingers met his wife’s, no doubt he was thinking about the first time he had plucked up the courage to reach out and hold her hand. “Aim!”. A twitching of trigger fingers from each member of the firing squad. The shots rang out the moment the last syllable of “Fire!” left the officer’s tongue and the bodies hit the floor not a second later. The crowd filtered through the gates of the yard, but Eli lingered and kneeled to tie a knot in his already secure shoelace. The bulge of the woman’s stomach, where she had shielded her unborn child, was at Eli’s eye-level. Feeling the glare of twenty pairs of eyes on the back of his neck, he had arranged his features into a vacant mask and stood up. He glimpsed the thick red liquid from two bullet wounds mixing in a pool between the couple, their hands having fallen half a centimetre apart.

Gabriel was leaning against Judas’ Wall whilst Emilia looked outwards like a bodyguard at his shoulder when Eli reached the yard. It struck Eli how similar the pair looked when they stood together, which he then thought was stupid because they were twins. Twins were authorized by the Republic because their conception could not be helped. A familiar knot of envy had woven itself in Eli’s stomach. He used to find the waves of jealousy unnerving but one day he had watched their long limbs carry them from the yard and he had understood. Eli yearned for a sibling. A brother or sister who he could talk to when they were forced into the bunker underneath the garage to avoid the hurricanes, who would have his back against their nagging parents, who would simply be there. Eli kicked the football at a spot on the wall next to Emilia’s head. Being threadbare and rather deflated it did not make the satisfying thump! that Eli instinctively expected but it, nonetheless, managed to bring the twins out of their reverie.

As Eli’s micro-watch began its fifteen-minute countdown, Emilia booted the ball so hard it crushed an unsuspecting starling against the wire mesh. It was only after the bird crumpled to the floor that Eli realised he had not heard a screech of pain. The football bounced back into Eli’s hands, but he noticed no red skid marks across its tattered surface. No blood amongst the feathery wreckage at the base of the fence. The bird was twitching with a mechanical groan and a spark shot out from what looked like a wire buried in the odd angles of its wings. Emilia was frozen. She blinked back tears that seemed to pool from the dark depths of her pupils as the others surrounded the bizarre heap. Eli’s brows furrowed. He had heard rumours that the Republic had locked endangered animals in laboratories and were artificially breeding them, but the constant oscillations of bird song caused him to doubt these stories. Now that the speaker embedded in the starling’s beak was exposed, it was impossible not to consider that the Republic was hiding the true extent of the mass extinctions.

“We should throw it over the  fence.”

Eli did not know who had made the suggestion, but he wholeheartedly agreed. He was sure the Republic would be able to track their birds but if they found it on the road they might be convinced that it had been hit by an oblivious car. No one seemed willing to move it. Eli took off his t-shirt and reached through the fabric to pinch the robotic wing before hurling it over the fence and into the road. Nobody dared to speak. They hardly dared to blink for a breath. Then the alarms of their micro-watches jolted them out of their charged silence.

Eli’s house was only one precariously left on the edge of an eroding cliff. It lay in wait to be dragged to its deceased neighbours in the unfathomable depths of the dying ocean. Eli took the stone steps leading from his house two at a time then edged into the water until it kissed his knees, careful not to trample over the seagrass that he had spent so many months cultivating. A singular seagrass plant had given Eli the ability to grow an entire underwater meadow that now housed seahorses, trout, and an especially sluggish flatfish. It struck him that these, too, might have been manufactured by the Republic, but he did not seriously think they would spend money on building the fish-equivalent of a piece of cardboard. The seabed was one of the only pieces of wildlife that Eli had ever experienced. He would do anything to keep it safe from those who would attempt to turn it into a grotesque tourist attraction. The last place to see marine life in Penzance. The Cornwall that his grandparents recollected, the one that was home to basking sharks and porpoises and grey seals, seemed as distant to Eli as handwritten letters. The perpetual cycle of drought and water shortage, of sheltering from hurricanes in underground bunkers, of watching public executions before becoming a member of the Youth Corps or facing the firing squad himself, suffocated Eli’s already underdeveloped lungs. He wanted to watch his seagrass grow into a sanctuary where new-born seahorses could hide and seek whilst the trout swam laps and the flatfish slumbered; safe from the carnage sweeping the globe.

Excellent world-building! The author managed the threshold between ‘reality’ and ‘fiction’ exceptionally well. The idea of The Republic is introduced with such subtlety the reader begins to feel as if it always existed. This, then, is an excellent work of imagination and there can be no higher commendation for fiction than that it washes over its reader making them question their reality, if only for a moment. Some of the passages were a little overwrought but this in no way took away from the sense of fully realised world.” Kayo Chingonyi, Orwell Youth Prize Judge

‘What We Lost’ is a wonderful feat of  imagination, by turns touching and bleak, and with a powerfully drawn sense of loss and regret. Some scenes are particularly sharply  written, and in making what should be unimaginable so horribly real in these passages, Lauren has captured something Orwell felt to be of the essence – that writing should be true. She is a worthy and deserved winner.”  Ken Macdonald QC, Chair of the Orwell Foundation

Lauren Debruin is a senior 2020 Orwell Youth Prize winner, responding to the theme ‘The Future We Want’.