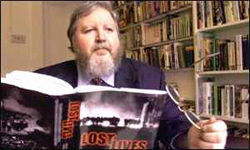 David began his career as a reporter for the East Antrim Times. He joined the Irish Times in 1973 as a reporter in Belfast, becoming Northern editor in 1976 and London editor in 1981. He worked briefly for BBC Northern Ireland, 1985-6, before joining the The Independent (London) in 1986; he has since worked as the paper’s Irish correspondent. Widely recognised for the scope of his knowledge and the balance of his reporting on Northern Ireland, he contributes regularly to overseas newspapers and journals. His many awards include the Christopher Ewart-Biggs Memorial Prize for the promotion of peace and understanding in Northern Ireland, 1989 and 2001; and Correspondent of the Year, 1999.