The Orwell Foundation is extremely grateful to its partners and sponsor. If you are interested in supporting the Foundation’s activities in any way, please get in touch.

In addtion to the partners and sponsors listed below, the Foundation would like to thank The Gibbons Family Trust and The Catherine Cookson Trust for their support of Orwell Youth Prize workshops and events in Devon and the North East, respectively.

Since its foundation in 1930, the Political Quarterly has explored the key issues of the day from a centre left perspective and promoted debate about them. It is dedicated to political and social reform and has long acted as a bridge between policy-makers, commentators and academics. The Political Quarterly addresses current issues through serious and thought-provoking articles, written in clear jargon-free English. Many of PQ’s readers are academics, but the journal aims to address the interests of a broad readership of policymakers, politicians, journalists, students and the informed public.

The Political Quarterly publishes analysis, insight and informed opinion on politics and public policy in the UK and globally. It aims to provide access to current academic debates and draw on critical intellectual arguments, but its hallmark is the use of plain English, avoiding theoretical and technical jargon. It is run by an independent editorial board and currently published by Wiley Blackwell. As well as the journal, the Political Quarterly publishes books, organises political debates and events and sponsors the prestigious Orwell Prize for Political Writing. The Political Quarterly is broadly centre-left in outlook, but publishes a wide range of authors and viewpoints. The current editors are Deborah Mabbett and Ben Jackson.

UCL is home to the Orwell Archive, the world’s most comprehensive body of research material relating to George Orwell, and a centre for Orwell scholarship.The Orwell Foundation is based in UCL’s Institute of Advanced Studies (IAS), which facilitates critical thinking across conventional disciplinary boundaries. The Institute of Advanced Studies is a research-based community of scholars comprising colleagues and doctoral students from across UCL as well as visiting fellows and research collaborators/interlocutors from the UK and internationally. The IAS is committed to critical thinking and engaged enquiry both within and across conventional disciplinary and institutional boundaries, and aims to provide a creative and generative context in which to question and dislodge habitual practices and modes of thought.

The Orwell Foundation expects to be able to develop Orwell scholarship and cultural and political engagement in the sympathetic and stimulating environment of the IAS.

The Joseph Rowntree Foundation sponsors and supports the Orwell Prize for Exposing Britain’s Social Evils, including the Unreported Britain Project. The Joseph Rowntree Foundation is an independent organisation working to inspire social change through research, policy and practice. Its vision is for a prosperous UK without poverty where everyone can thrive and contribute. To achieve this, the JRF work in partnership with private, public and voluntary sectors, as well as with individuals and communities. Using evidence and experience, the JRF searches for the underlying causes of social problems and demonstrate practical solutions in order to influence lasting change.

The Foundation is grateful to Penguin Books for licensing its online resources over a number of years and supporting the Foundation’s educational activities.

Oxford University Press is a long-term partner and sponsor of The Orwell Youth Prize. In recent years, many OUP employees have taken part of the Youth Prize’s volunteering scheme, offering valuable, individual writing feedback to all OYP entrants who ask for it.

Pembroke College Oxford has hosted The Orwell Youth Prize annual Celebration Day over a number of years, providing space for hundreds of young people from across the country to come together for a day of workshops and debates.

Richard Blair is the adopted son of George Orwell. He writes: ‘I first became involved with The Orwell Prize many years ago. It had been set up and organised by Sir Bernard Crick for a number of years prior to my coming on board. The awards had grown in stature and were taking on a life of their own. It became obvious that more people needed to be involved in organising the whole affair. Whilst I was happy to allow those with better connections than I when it comes to recognising the right people to get involved with the awards, I am very much in favour of it going onwards and upwards as Orwell’s relevance is still as important today as it was when he was alive. It is to this end that I will do all in my power to help achieve the status that the awards deserve.’ 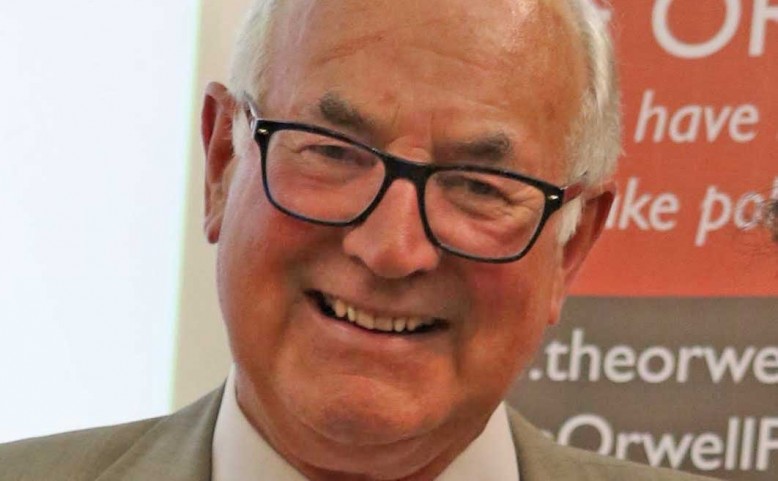 ‘Rethinking Poverty’, a project by the Webb Memorial Trust, sponsored and supported The Orwell Youth Prize’s 2020 programme ‘The Future We Want’, providing workshops and events for young people across the country and ensuring our winner’s writing reached the widest possible audience. In 2021, The Youth Prize worked with ‘Rethinking Poverty: The Webb Trust’ for a second year, with a particular focus on encouraging young people to write with authority about the change they would like to see in the place they live.

As ‘The Orwell Prize’, The Orwell Foundation operated under the auspices of the Media Standards Trust from 2008 until 2015.

The Miles Morland Foundation (MMF) is a UK registered charity which makes grants in areas reflecting its founder’s interests. The Foundation’s main aim is to support entities in Africa which allow Africans to get their voices better heard. The Foundation has previously been a sponsor of The Orwell Prize and The Orwell Youth Prize.