The Orwell Youth Prize is much more than just a Prize. We take leading authors, journalists, poets and reporters into schools, universities, and community centres to work with young writers and teachers.

Scroll down to read about the various events we offer, or skip to a particular section below:

We take a guest writer into every school, often an Orwell Prize nominee – an author or journalist who can share skills and experience with young people, and participates fully in the workshop. Many workshops also bring together students from different schools, allowing students to discuss their ideas with peers from outside their usual school groups.

The workshops are centred around discussion, with students encouraged to talk about issues that concern them, and to be confident in their ability to express their views. Each workshop uses an Orwell text as a starting point for a discussion, which can then develop into a way for students to think about how to approach their own writing. Generous support from Penguin means we can provide every student who participates with a copy of a selection of essays by George Orwell. 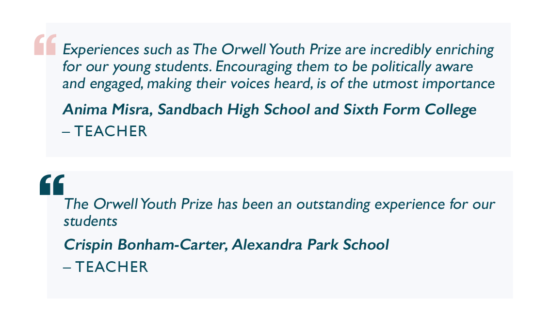 Workshops are available to schools across England and Wales subject to availability, and through our target schools scheme we also aim to provide subsidised workshops and seminars to schools which meet our criteria for educational inequality, led by our experienced Delivery Director Mick Callanan and high-quality guest writers.

Our forums are designed to spur young people to think about the change they want to see in society and communicate their ideas with impact and confidence. In 2019 we held an Injustice Commission at the Great North Museum in Newcastle and we held a similar event in collaboration with the University of Hull and #thehullwewant in 2020.

In previous years, the Youth Prize has culminated in an annual ‘Celebration Day’ at Pembroke College, Oxford, brings together over 100 young people from all over the country for a day of writing seminars, debate, and celebrating the winners of the Prize.

Far more than just a prize-giving, the day featured workshops with award-winning writers and journalists and aims to inspire and raise the aspirations of all young people in attendance.

In 2022, we are making plans for a series of events for entrants as part of The Orwell Festival of Political Writing in London, where the winners of The Orwell Youth Prize will be announced alongside the finalists for prestigious The Orwell Prizes.

The Orwell Youth Prize is about hearing voices from across the UK. The closure of schools under lockdown meant that some young people and some communities were harder to reach than usual. In response, the Orwell Youth Prize worked with Stephen Armstrong to host workshops with community centres in Paisley and Wigan. Click on the links to find out more about the Wigan Sunshine House Workshop and Paisley Workshop.

Just some of the brilliant writers who have taken part in Youth Prize workshops over the years: