£6 (ticket may be redeemed against any book)

Join John Kampfner, Sarah Moss and Olivette Otele for a discussion of their Orwell Prize-longlisted work at this special online event in collaboration with The Orwell Foundation. John Kampfner’s Why the Germans Do It Better and Olivette Otele’s African Europeans: An Untold History are both longlisted for the Orwell Prize for Political Writing, while Summerwater by Sarah Moss is longlisted for the Orwell Prize for Political Fiction. The authors will be joined on the night by Angela Saini, who is a judge for this year’s Political Writing prize.

The Orwell Prize longlists feature the finest political writing across non-fiction, fiction and journalism of last year: work that our judging panels believe best fulfils Orwell’s state ambition “to make political writing into an art.” Throughout the spring of 2021, the Orwell Foundation will be celebrating this writing in several ways, including a series of online events in association with independent bookshops across the U.K. These will spotlight some of the major themes arising from the longlists, and will feature writers from different lists being brought together to discuss their work.

John Kampfner is an award-winning author, broadcaster and foreign-affairs commentator. He began his career reporting from East Berlin (during the fall of the Wall) and Moscow (during the collapse of communism) for the Telegraph. After covering British politics for the Financial Times and BBC, he edited the New Statesman. He is a regular TV and radio pundit, documentary maker and author of five previous books, including the bestselling Blair’s Wars.

Olivette Otele is Professor of the History of Slavery at the University of Bristol and Vice-President of the Royal Historical Society. She is an expert on the history of people of African descent and the links between memory, geopolitics and legacies of French and British colonialism.

Angela Saini is an independent British science journalist and the author of three books, including Superior: The Return of Race Science. She presents radio and television programmes on the BBC and her writing has appeared in  The Sunday Times, Nature, New Scientist, National Geographic and Wired. She has won a number of national and international journalism awards.

Tickets include a £6 voucher that can be redeemed against any item on The Portobello Bookshop website – including books by the featured authors. Registration is with The Portebello Bookshop, where all ticketing enquiries should be directed. 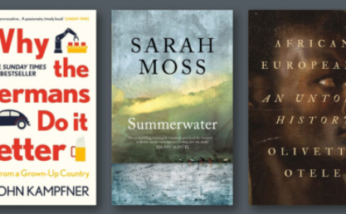