In the acres of Covid coverage, young peoples’ future has been a political weapon for every side – school, jobs, and mental health all discussed and described by everyone except young people themselves. This year’s overwhelming number of entries to The Orwell Youth Prize proves that young people have a lot to say about their future – both the future they want and the future they fear. Winning pieces reveal concerns over knife crime, climate change, systemic racism, social housing, gender inequality and the future of work. The winners follow in the footsteps of the sought-after Orwell Prizes for political writing, which are administered by the Youth Prize’s ‘Big Brother’, The Orwell Foundation,whose winners were announced last month,

The seven winning pieces, echoing George Orwell’s own genre-hopping, include short stories, journalistic essays and poetry, were judged by writer Kerry Hudson and poet Kayo Chingonyi. Alongside the winning pieces, analysis of the collective prize entries revealed mental health, the climate crisis, social media and tackling racism to be clear concerns for young people seeking to create a better future.

It was a tremendous honour to read this work and gain an insight into some of the things young people are thinking about. We found a particularly moving political engagement in writers who are at the beginning of their writing lives but write as if they’ve been writing for decades, lifetimes. I want to commend all entrants for having that courage to set something down on the screen or on paper and share it with the world.”

This year’s winners are as follows:

[Read the full list of winners, runners up and highly commended entries]
Lessons From Lockdown

In the year when teacher and writer Kate Clanchy won the Orwell Prize for Political Writing for her memoir ‘Some Kids I Taught and What They Taught Me’, teachers were crucial in encouraging young people to enter the prize, despite schools being closed: almost 80% of entrants told the Youth Prize that it was their teachers who had alerted them to the opportunity.

I want to congratulate the teachers, I know that’s how students – especially those from a disadvantaged or unconventional background – get to these prizes and opportunities. What you’ve done for your students they will always remember, it will change their lives now and in incremental ways into the future.”

With entries more than quadrupling in lockdown compared to previous years in the face of an unprecedented demand for educational resources and engagement, the Orwell Youth Prize transformed into a network of volunteers to enable the charity to meet its offer to young people. 170 volunteers, including academics, editors, PhD students and professional writers and journalists came together from organisations such as Oxford University Press, King’s College London, University College London and the University of Westminster to offer 600 entrants personalised feedback on their drafts and help with the sifting process for judging.

Professor Jean Seaton (the Director of the Orwell Foundation) said:

We were so proud that young people turned to the Prize as a way of saying what was important to them during lockdown. We had to scramble an army of volunteers to give them feedback, fan out to writers and political players to respond to their ideas, as they asked us. Everyone wanted to help because everyone knows these voices tell us things we need to know. And we listened to the wider story the entries told us: we will honour that creativity and bleakness in the coming year.”

The lockdown also impacted the Orwell Youth Prize’s face-to- face programme designed to support harder to reach young people around the country to enter the prize. While many resources were put online, the Orwell Foundation also knew that not all young people have reliable internet access and the support systems to enter. As a result, the Foundation ran a sustained series of focused workshops delivered by writer Stephen Armstrong with the Star Project in Paisley, Scotland, to support a small number of young people to write about the future they want, but to also reflect on the impact of coronavirus on their lives and communities. Stephen also worked with Cloe Heaton, a university undergraduate from Wigan, who spent her lockdown period volunteering at the Sunshine House Community Centre, to write on her experience.

The end of the Prize is not the end of the story. The prize has shown what young people fear and what they want, it has also revealed whose voices and ideas are missing. There is work to be done. The Orwell Foundation is committed to getting these pieces of writing and ideas an audience. So far, commentary on the winners has come from professional journalists, authors and politicians of all stripes, from Ruth Davidson MSP and former children’s laureate Malorie Blackman OBE to Times investigative journalist and Orwell Prize Shortlistee Rachel Sylvester and Orwell Prize winner Ian Birrell.

The Orwell Youth Prize gives a much-needed vehicle for young people to use their moral imagination to set out the society they want. Young people don’t have the baggage of older people and can cut through the obstacles that stand in the way of a good society.  We will be examining the entries to the prize and preparing a composite overview of the lessons we can draw from this excellent work.”

The winners, runners-up and highly commended entries are as follows: 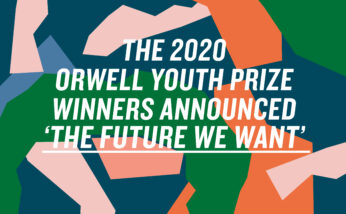