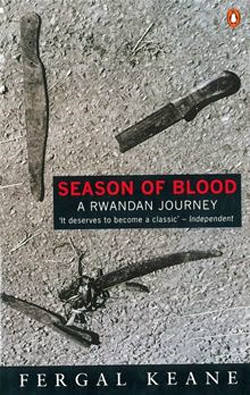 Season of Blood: A Rwandan Journey

When President Habyarimana’s jet was shot down in April 1994, Rwanda erupted into a hundred-day orgy of killing – which left up to a million dead. The world’s media showed the shocking pictures, and then largely moved on. Fergal Keane travelled through the country as the genocide was continuing, and his powerful account reveals the terrible truths behind the headlines. He takes us to the scene of the appalling massacre at Nyarubuye, to the camp in Tanzania where the chief perpetrator lives like a prince, to the orphanages and Red Cross hospital, through territory controlled by Hutu extremists, and behind the siege lines, as Kigali is about to fall. Yet his searing descriptions are matched by trenchant political and historical analysis.

This book offers a few brief glimpses of hope – of individual decency and heroism – but is essentially the story of an encounter with evil. It offers an unforgettable portrait of one of the century’s greatest man-made catastrophes.