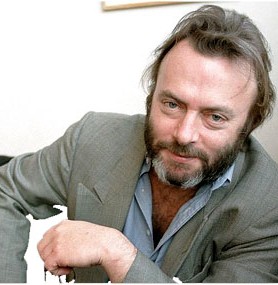 Christopher Hitchens was memorialised for his passionate contribution to political writing. In the name of the Prize, Peter Hitchens, himself an Orwell winner, presented a Memorial to Carol Blue, Christopher’s widow. Christopher Hitchens, the writer and commentator once described as the heir to Orwell, died last year at the age of 62. His final book Arguably was longlisted for this year’s prize and his memoir Hitch-22 was shortlisted for the 2011 Orwell Prize for Books. His books, journalism and more recently blogs have shaped political writing and thinking for a generation.

We are especially delighted to welcome Christopher Hitchens’ family and children to the Prize. Ian McEwan wrote of Hitchens that, “His unworldly fluency never deserted him, his commitment was passionate, and he never deserted his trade. He was the consummate writer.” Hitchens carried Orwell’s ambition “to make political writing into an art” forward and made it his own: he crafted a literate politics that helped form a world view.