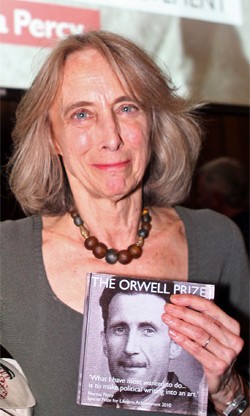 A Special Prize for Lifetime Achievement was awarded to documentary-maker Norma Percy. Executive producer at Brook Lapping, Percy’s most recent work was Iran and the West for BBC Two, with previous documentaries including The Death of Yugoslavia, The Second Russian Revolution, Israel and the Arabs: Elusive Peace, Endgame in Ireland and Watergate. She was awarded (jointly, with Brian Lapping) the BAFTA Alan Clarke award in 2003 and the RTS Judges award in 1996, and her work has won a number of other major prizes (including an Emmy). She was presented with the Trustees’ Award at the Grierson Awards 2009.

We felt Norma Percy deserved the Prize because of her unflagging commitment, energy and resourcefulness over some three decades of important work that reframed key events in contemporary history by showing the human face of history: that mortals were involved.”