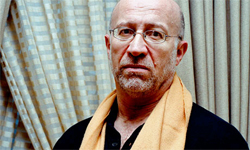 A Special Prize for Lifetime Achievement was awarded to Tony Judt, whose book Reappraisals (William Heinemann) had been shortlisted for the Book Prize.

Although sometimes overshadowed by fiction and poetry, history and the essay are just as much branches of literature, and indeed of ‘creative writing’, and they have produced much of the best writing of our age. Even in a rich field of brilliant historians, the name of Tony Judt stands out. From his first scholarly work on socialism in nineteenth-century Provence he came nearer home with his learned but also coruscating Past Imperfect: French Intellectuals, 1944-1956, describing the “self-imposed moral amnesia” of those intellectuals, and then the crowning achievement of his magnum opus, Postwar.

But like other great historians before him he has also engaged in public debate, becoming a politicologue – a word for which we need an equivalent – and controversialist, whose essays, largely in the New York Review of Books, have been distinguished by their intelligence, insight and conspicuous courage. His collection of these essays, Reappraisals, was a strong contender for this year’s Book Prize, but the judges felt that Judt’s work as a whole deserved special recognition. If there is – in the best sense – an ‘Orwellian’ writer in our time, it’s Tony Judt, and it is an honour to bestow honour upon him.