Over 50 leading cultural figures read sections of the book alongside members of the public to create the UK’s first ever live reading, on the site of the inspiration for the Ministry of Truth – Senate House. The reading was offered as an act of subversion in itself, an included immersive staged elements, submerging audiences in the world of Big Brother, IngSoc and The Party. Using projection and actors from UCL, the audience were able to absorb the intrigue and horror of 1984.

The reading was directed by Hannah Price and produced by Libby Brodie Productions.

1984 Live was part of the UCL Festival of Culture 2017 a week-long festival, comprising talks, workshops and exhibitions, set to challenge your thinking and offer new ways of understanding our world.

Libraries and Theatres across the country screened the reading and organised satellite events and activities – see below for more information.

In order of appearance, the Readers of 1984 Live were:

Journalist and Editor, The Oldie.

Lord Macdonald QC, Chair of The Orwell Foundation and Liberal Democrat Member of the House of Lords.

Son of Georges Kopp, Orwell’s commander in the POUM.

Editor, Nature journal. Author of The Life Project (2016), longlisted for The Orwell Prize for Books 2017.

Journalist and Literary Critic. Curator of M-Fest: A Muslim Festival of Books and Ideas. Deputy Editor of Wasafiri Magazine.

Writer, broadcaster and award-winning feminist campaigner. Author of Do it Like a Woman (2015).

Producer, most recently “I, Daniel Blake”

Journalist, Columnist at the Mail on Sunday. Winner of the Orwell Prize for Journalism 2010.

Writer and Journalist. Shortlisted for the Orwell Prize for Books 2017.

Journalist and Writer, most recently co-author of Cut (2016). Longlisted for The Orwell Prize for Books 2017.

Editor of Books and Arts, the Economist

Director, Centre for the Study of Media, Culture and Power, King’s College London.

Singer-Songwriter and activist. Albums include Talking With the Taxman About Poetry, and Shine a Light with Joe Henry.

Television Presenter and author of None of the Above (2015).

Head of Special Collections and Archivist in UCL Library Services

Crime fiction writer, Biographer and Historian. Shortlisted for The Orwell Prize for Books 2017.

Actor. Recent credits include “The Inbetweeners Movie” and “The Philanthropist”.

Journalist and Conservative Member of the House of Lords. Former Editor-in-Chief of the Wall Street Journal Europe.

British-Nigerian Writer, Broadcaster and Historian. Author of Black and British, longlisted for the Orwell Prize for Books.

Professor in History and Foreign Policy at King’s College London. Shortlisted for The Orwell Prize for Books 2017.

Turkish Journalist and Author. Fired as a columnist from Habertürk after writing articles critical of the government.

Head of Culture, the Daily Telegraph.

Broadcaster, author and member of the House of Lords, best known for the BBC Radio 4 Programme In Our Time.

Award-Winning Television and Film Director, most recently I, Daniel Blake.

Journalist. Shortlisted for the Orwell Prize for Journalism 2017.

Writer, Political Commentator and Journalist. Media diarist for The Independent.

Dean of Arts and Humanities at UCL.

Playwright whose work has been produced by the National Theatre, Royal Shakespeare Company and Royal Court Theatre. He lost his virginity in 1984.

Former MP for Hull West and Hessle, former Home Secretary and winner of The Orwell Prize for Books 2014.

Actor. Most recent work : Boa, Brutus, King Henry and Prospero in the Donmar all-female Shakespeare Trilogy. Recent films include “The Sense of an Ending”. Author of Brutus and Other Heroines.

Actor. Recent credits include: “Boa”, “Death of a Salesman” and on film “Fantastic Beasts and Where to Find Them”.

Poet, performer and author. Contributor to The Good Immigrant (2016).

Actor and writer. One of 21 featured essayists in the award-winning The Good Immigrant (2016).

Director best known for work in theatre and as the director of Mamma Mia! and The Iron Lady

Scottish journalist and writer. Visiting Professor of Archaeology at UCL.

Canadian actress, filmmaker and DJ with a love for classic literature, soul music, love itself and understanding

Hannah Price is Co-Artistic Director and Founder of Theatre Uncut, the winner of two Fringe First awards, a Heralds Angel award and the Spirit of the Fringe Award. She was Resident Assistant Director at the Donmar Warehouse and was recently Associate Director to John Malkovich on Good Canary.

Libby Brodie Productions has most recently produced the European premiere of Waiting For Waiting For Godot (St James Theatre), Little Shop of Horrors (UK Tour) and the world premiere of Run The Beast Down (Marlowe Theatre, Finborough Theatre) and currently, The Philanthropist (Trafalgar Studios).

Robbie has twice been nominated for an off west end award for best lighting design and in 2015 was the winner of the ETC award from the association of lighting designers. More information can be found at www.robbiebutlerdesigns.com

Libraries and theatres all over the country are getting involved- there might be a satellite event near you: 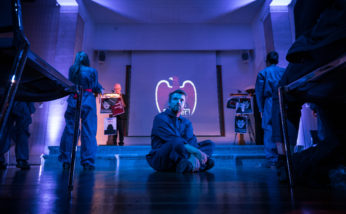