The winners of the Orwell Prize 2012 were announced on Wednesday at our Awards Ceremony at Church House, Westminster. Christopher Hitchens’ widow Carol Blue accepted an Orwell Prize Memorial for his passionate contribution to political writing, Amelia Gentleman won the Journalism Prize, Rangers Tax-Case won the Blog Prize and Toby Harnden’s Dead Men Risen won the Book Prize. On our website you can read the press release with full details. Footage of the entire evening will be uploaded to our website soon. 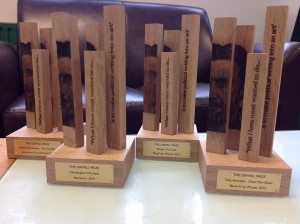 For The Orwell Prize 2012 we commissioned two Goldsmiths, University of London students to create trophies. Martin Kilner and Tai-li Lee drew inspiration from our recent website redesign by Sid Motion to imagine a prize they aspired to visually represent Orwell’s ambition to make political writing into an art. They laser cut their graphics into ethically sourced oak because they felt it important not to over embellish in any way that would contradict Orwell’s writing. The four pillars of the trophies stand for the four prizes awarded in 2012. Judges presented winners with their handmade trophies and Christopher Hitchens’ widow Carol Blue accepted an Orwell Prize Memorial trophy from Peter Hitchens. Martin Kilner will represent Goldsmiths at the 2012 Design Summit. Goldsmiths University wrote about their students on their website

We’ve had some wonderful feedback from the Awards Ceremony and today we are re-reading Politics and the English Language the essay in which Orwell asserts one of his beliefs we took on as a value of the Prize, “In our age there is no such thing as ‘keeping out of politics’. All issues are political issues, and politics itself is a mass of lies, evasions, folly, hatred, and schizophrenia.”

Lots of people have written about our winners this week:

This week’s entries were published on 21st, 22nd and 27th May 1942. Next week’s entry will be published on 30th May 1942. Don’t forget our other Orwell Diary blogs: his Hop-Picking Diary and The Road to Wigan Pier Diary. If you’ve got any suggestions about our website(s), we’d love to hear from you – email us on katriona.lewis@mediastandardstrust.org or follow us on Twitter. 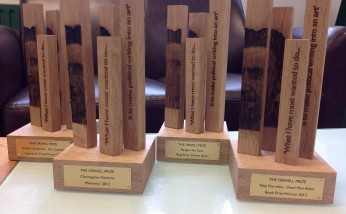