The Orwell Foundation is deeply saddened to announce the death of Professor Peter Davison, one of the pre-eminent authorities on the life and works of George Orwell, and, with the assistance of his late wife Sheila, Orwell’s long-time editor. Davison’s The Complete Works of George Orwell, which runs to twenty volumes, was first published in 1998.

In a personal tribute (published in full below), the Foundation’s Director Professor Jean Seaton, said: “Peter’s extraordinary contribution was the make the modern Orwell possible.”

The Foundation sends its condolences to Professor Davison’s family.

The Foundation is privileged to host a number of resources featuring Professor Davison and his work on our YouTube channel, including an extended interview on his book ‘George Orwell:  A Life In Letters’ and an appearance at the Cheltenham Literature Festival in 2010. Professor Davison’s memoirs, written in 2020 are available on the Orwell Society’s website and Peter’s collection of Orwell-related books and other material, donated by him to the Society, is on permanent loan to the Museum of Wigan Life.

“Only Peter Davison could have recognised Jacintha Buddicom, leaving a solicitor’s office from an apparently insignificant picture taken by a passing street photographer in 1927. Buddicom had just signed away her illegitimate daughter to an uncle and aunt. The baby was not Eric Blair’s, though Blair (Orwell’s real name) had brought back an engagement ring for her when he returned from Burma. She would not, could not, see him as she was expecting the child. Blair believed that she would not see him because she had resented his bungled physical approach before his departure for Burma. Only Peter could identify why this picture mattered, but only Peter brought a special humanity to the interpretation – it was the young, distraught women’s body language that had alerted him to look more closely at the picture. In doing so he put together a poignant piece of the emotional jigsaw around George Orwell’s early life (and Jacintha’s). It was an eloquent identification.

Peter Davison has sadly died with his sons around him. His darling wife and helpmeet Sheila died several years ago. He was a super scholarly sleuth. The scale of the intellectual mastery breathtaking. Peter’s extraordinary contribution was to make the modern Orwell possible.

Peter edited with a tenacity, comprehensiveness, and sheer love the complete works of Orwell. Without this extraordinary work of scholarly compilation, exquisitely edited and contextualised, Orwell’s work would be fragmented and dispersed, and the range of the writing and the development of his thinking would be lost. Davison allows any reader to discover the milieu, the moment, and the development of every fragment of Orwell’s writing. It is a remarkable achievement. Seeing the works to publication was in itself an epic story.

Peter was a very sweet, modest man who combined warm human communicativeness with a splendid capacity to hunt down and hold onto details. He brought to Orwell studies a dedication to accuracy that matched the author’s own. I first met him when my husband (who died many years ago) wrote an introduction to Orwell’s essays on England. There was a hilarious supper in a trendy Notting Hill restaurant on the night the book was launched. Peter ordered fish and it, somewhat surprisingly, arrived with banana. The table, as I recall, riffed on Orwell and bananas.

Peter was loveable and has, in a formative way, made the Foundation’s work possible. We send our condolences to his children and grandchildren and celebrate a special life, so well lived, that contributed so much to public understanding of important things.” 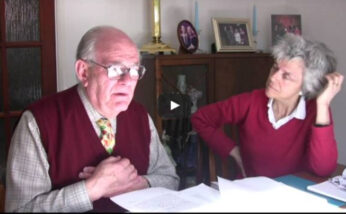