George Orwell wrote with integrity, truthfulness and fairness about the world around him. Now it’s your turn.

You can write in any form you like: journalism, essays, short stories, blog posts, poems, and plays are all welcome. How you respond to this year’s theme is completely up to you. However, we’ve pulled together a few resources that might help get you started or spark an idea. 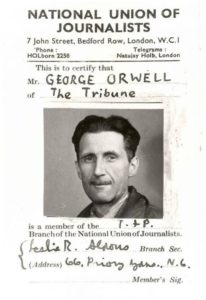 ‘The average millionaire is only the average dishwasher dressed in a new suit.’
George Orwell (Down and Out in Paris and London)

‘Is not England notoriously two nations, the rich and the poor?’
George Orwell (England Your England)

‘Poverty is poverty, whether the tool you work with is a pick-axe or a fountain pen.’
George Orwell (The Road to Wigan Pier)

‘All animals are equal, but some animals are more equal than others.’
George Orwell (Animal Farm)

As the Orwell Youth Prize, we find the man himself is often a good place to start.

Orwell wrote on a wide range of subjects relating to fairness, from economic distress in Britain in the 1930s, to the impact of the British Empire, and the dynamics of totalitarianism. He wrote from his own experience, but he also sought to explore lesser-known stories and perspectives.

It is important to bear in mind that Orwell was writing almost 100 years ago, so some of the language he uses may seem uncomfortable today. Try to think about what has changed and what remains relevant with regards to his subjects. Think too about the writing techniques Orwell uses and the imagery that sticks with you as you read. We have a host of Orwell resources available for you to get your teeth into, and some helpful context on Orwell and fairness to frame his work. Find out more.

When we think about fairness and justice in our society, it is hard to know where to begin. Inequality affects individuals in many different ways. Poverty, health, employment, gender, race, education, geography and housing are just some of the key factors that impact inequality. Often, these factors do not stand in isolation but intersect.

Below are some links that explore how these factors are impacting individuals today. We will keep adding new resources throughout the course of the prize being open. This list is in no way exhaustive. Think also about news items you’ve seen, articles you’ve read and what you observe around you.

WHERE ARE WE NOW?

Stephen Armstrong, ‘The New Poverty. The Beveridge Report: where are we now’ (Verso)

Truth and Lies about Poverty, hosted by LSE “Beveridge 2.o” and The Orwell Youth Prize

‘A Northern Soul’ hosted by June Sarpong MBE on Is anyone listening? The Joseph Rowntree Foundation Podcast

Stephen Armstrong and Maruxa Ruiz del Arbol, ‘The rise of DIY dentistry: Britons doing their own fillings to avoid NHS bill’ (The Guardian)

Unreported Britain: the nation’s teeth – The Story from The Guardian Podcast

Amelia Gentleman, multiple articles on the Windrush Scandal (The Guardian)

Kamila Shamsie, ‘Unbecoming British: citizenship, migration and the transformation of rights into privileges’ – The Orwell Lecture 2018 (The Orwell Foundation and UCL)

Stephen Armstrong, ‘The young farmers who earn so little they cannot afford their own produce’ (The Sunday Telegraph)

James Beavis, ‘Spat on and ignored’: what I’ve learned from a month sleeping rough in London’ (The Guardian)

Anna Minton, multiple articles on housing and the city  (The Guardian)

Sarah O’Connor, ‘Left behind: can anyone save the towns the economy forgot?’, (The Financial Times)

Juliette Bretan, ‘The North-South divide is getting worse – because London is sucking all opportunity from the rest of the UK’ (The Independent)

Aleksandra Wisniewska, Billy Ehrenberg-Shannon and Sarah Gordon – ‘Gender pay gap: how women are short-changed in the UK’ (The Financial Times)

As told by Kate Lyons, ‘Transgender stories: ‘People think we wake up and decide to be trans” (The Guardian)

And if you have any further questions, suggestions or ideas, please get in touch with Alex Talbott, alextalbott@orwellyouthprize.co.uk