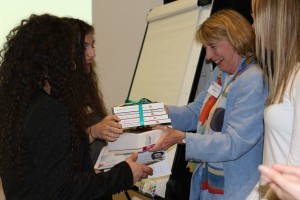 Elizabeth Paris, Chair, presents winners of the Orwell Youth Prize 2016 with the works of George Orwell

The winners of the Orwell Youth Prize 2016 were announced at the Celebration Day, held at Pembroke College Oxford on Friday 24th June 2016.

Every entry was reviewed by at least two assessors. The winners were chosen by Professor Jean Seaton, Director of the Orwell Prize and Amelia Gentleman, Social Affairs Writer at the Guardian.

The Prizes were presented by Bill Hamilton (Trustee of the Orwell Youth Prize and Executor of the Orwell Estate), Professor Jean Seaton and Rachel Goode of Oxford University Press.

Ben Ettridge, Are we setting children up to fail?

The Winners in the Upper Age Cateory (Years 12 and 13) were:

Kanaar Askari and Carla Mufid, Victims of a Map

Anna Morris, The Voice of a Benefits Claimaint

The following entries were Highly Commended:

Maeve Dolan, Why must we suppress thought process?

Ellie Nevin, An Ode to my Mother

Sara Olukoga, The Media: No.1 Recruitment Agency for ISIS

Jacob Harris, We Should Have

Shaina Sangha, A Plea in the Dark

The Runners Up in the Upper Age Category (Years 12 and 13) were:

Eren Balkir, The attack on Free Speech within the UK

Sam FitzPatrick, Truth in the Media

Max Glynn, An Open Letter to Modern Liberty (unable to be here today)