My expectations were way too high. I woke up on my fifteenth birthday thinking I’d get the best Label ever, but when I awoke and glanced at my right forearm, the tattoo was staring back at me. Terrorist. What? My Label says Terrorist? Does society see me as one? Confusion flooded my head and I was heartbroken to see that horrid word.

Soon, my mother screamed from downstairs, “Khadija! Are you awake? Come downstairs!” I sighed heavily. After getting ready I trudged downstairs and arrived to a scene in the kitchen. A cake on the table, a few colourful balloons and a fairly large banner that said ‘Happy Label Day, Khadija!’. Label Days are like Quinceañeras but instead of just turning fifteen, you also get your Label; a birthmark-like tattoo that describes what society sees in you. It could be a good Label or a bad Label. It depends on your surroundings, really.

“Wow…thank you so much, it’s-it’s great!” I stammered. I awkwardly avoided eye-contact with my parents.

“So…” Said my mother. “Pull up your sleeve! Let’s see!” My father was holding a video camera and was recording the whole thing. Seriously, who still uses those? Reluctantly, I dragged my shirt sleeve up to reveal the dreadful word I’ve been given. My mum and dad observed in silence. Unfortunately, Mother Peacemaker and Father Pacifist got a Terrorist, I thought.

The February wind bit my nose as I walked down the street. My mind was racing with possible reasons to why I was Labelled this way. Was it because I was a Muslim? Or because of the most recent terrorist attack in the town centre? Was it both? I pulled up my blazer sleeve up to my right wrist as the disturbing thoughts passed my mind.

Eventually, I had arrived at school. Indoors, it was warm and comforting, compared to the chilly outside. My friends knew it was my Label Day, so I tried to keep it subtle. I reached my locker and stuffed my belongings in- the sooner I did, the sooner no one would suspect anything, right? But little did I know that my blazer sleeve had slid down my arm, revealing my Label. That’s when Big Mouth Jawad stepped in. To be honest, I would have preferred that to be his Label instead of ‘Leader’. It’s all he brags about these days.

“Hey, looks like a Terrorist joined our school today!” He shouted. All eyes turned to me, while Jawad was pointing at my exposed tattoo. A few Year Eights backed away slowly as they saw me.

“Jeez, calm down. I just feel sorry for you. You have such a terrible Label. Too bad you can’t change it.” He strutted away, feeling proud for himself. If I wasn’t so embarrassed then, I would’ve taught him a lesson.

I walked away calmly. There were still students eyeing me suspiciously, flinching at my every move. Did people really believe everything they saw? Throughout the day, people came to ask me about my Label. If only I didn’t have to be defined by a silly tattoo. My friend Chelsea didn’t mind; she’s a great person. Chelsea’s Label was perfect for her though. She was an ‘Artist’. It was quite obvious since she was incredibly talented with her creative skills.

Chelsea and I strolled to the canteen that afternoon when people’s heads swiveled round to see me again. Whispers filled the hall and it made me uncomfortable. The whole situation was making me uncomfortable and I was so stressed with all the looks and rumours and associations that I abandoned Chelsea and rushed to the bathroom.

“Khadija, wait! Where are you going?” I heard Chelsea exclaim behind me. I knew she meant good but right there and then, I had to be alone.

I went to the bathroom at the far end of the building, hoping nobody would be there to witness the ‘Terrorist’ freaking out.

Angrily, I pushed the door open and stopped in front of the mirror. I observed my headscarf and realised it had been untidy all day. “Seriously, this Label ruined my whole day!” I muttered to myself as I fixed it up. After checking my appearance in the mirror, I lifted my hand to open the door again when I heard something move. Turning my head, I noticed there was someone in one of the cubicles. ” Uh, hello?” I said, a bit quietly. Almost immediately, the cubicle door opened and a timid girl shuffled out.

I recognised this girl. She had a small round pale face with large brown eyes. Her soft blonde hair was swept up onto one shoulder and her arms were hiding behind her. That’s when I realised she was in my Year. I tried to remember her name. It was something familiar…something like…

“Hope. That’s my name. I know the face people make when they try to remember my name.” She said quickly, as if she said this often. I could already tell she was a shy person.

“Why were you hiding in there?” I asked awkwardly. Hope sighed and revealed her Label. Insignificant. I had to admit, that’s a horrible thing to be seen as. “It’s awful! I hate it!” She sobbed.

I knew what she felt. So I told her, “I understand what you mean…but after a long day, I’ve realised that it doesn’t matter what a silly tattoo defines us as.” Hope looked at me reassuringly.

“But it’s permanent!” She argued.

“True. In this world, you should just be glad it’s not on your forehead!” I joked. She smiled, and I knew that we weren’t so different at all. 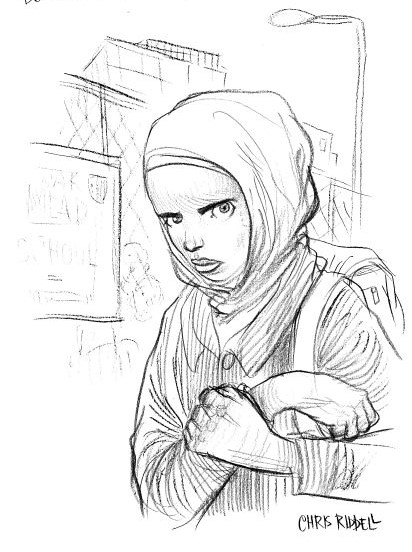