He’d been thinking about doing it for a while now. About going Down There. It wasn’t exactly illegal of course, but he was sure to lose his job. Probably lose a lot more come to think of it. Lots of people go Down There, he reassured himself, but he knew this was in part a lie. People did go Down There, but people rarely came back up. Going Below, the paper called it. Paper. Only the London Times remained in print. State owned of course. He wrote a weekly MP’s column for it. He wrote often about the gleaming city, and about the Bad Old Days of inequality. Inequality and old people. There weren’t many old people around anymore.

Nor fat, or thin,

poor, no one was poor anymore.

He used to think it was pretty impressive that the government had managed to solve all those glitches so quickly. London was perfect. At least, whispered Alfred to himself, on the Upside.

The Underground was never talked about, never questioned. Rarely even thought of. Alfred often wondered if the information people did have about it was The Truth. But more gravely, perhaps, he wondered if the silence around it amounted to a lie. It’s funny how people never thought to ask. Or if they did, they must have been silenced. He remembered a line his mother often used, from an old Russian poet, she said

“When truth is replaced by silence, the silence is a lie.”

The politician had never met a Russian, or a poet, but he decided he liked them. He liked them a lot more than any of his Meritocratic Party colleagues. Their 20th annual governing celebration was on Sunday, and Alfred thought he might live to see the 100th.

Hard work pays off. You get what you deserve in life. What Alfred got was a good salary as an MP for Hackney, a lovely flat with lovely furniture, and a lovely puzzle hobby. What he did to get this was a degree in Politics from Oxford. Parliament did also accept applicants from Cambridge, but they got paid less. The Cambridge degree was not as hard.

Anyway, graduation day was then, swearing secrecy and allegiance was then, blindly following authority was then. This, well this was now. This was a time for questions. He walked down past the shining buildings of Aldwych, down past the well-trimmed trees of Kingsway; there was the entrance to what once must’ve been Holborn Underground. Still is, in a funny way, Alfred thought.

Two burly police men stood at the small doorway arguing with a woman obscured by the shadows. Alfred thought she might be crying, but he wasn’t sure. He hadn’t seen crying in so long. Slipping nervously past the peacekeepers, past the shadowed lady, he started down into the bowels of his city.

Ahead were four halted escalators, like the ones he’d seen in the town-sized shopping zones. The place was dimly lit, and cold.

‘Here, put this on, don’t want ya gettin’ sleepy now’

a voice scratched around in the dark. Alfred recoiled, and a strong pair of hands clamped a strange contraption of mesh and scrap metal over his mouth and nose. Eyes wide, he saw a wrinkled dirt covered face looking sternly at him.

‘Alright, stop yer wrigglin’ I’m just helpin’! They pump some nasty gas down ‘ere every so often, ain’t pretty I tell ya that much.’

The man had a thick accent which Alfred was not familiar with. He had also never seen someone so old. Curiosity battled with fear in his synapses, the summation was shock, and his breath came heavy through the strange mask. An acidic, prickly scent filled his lungs.

‘What are you, writin’ for a secret linen? Lost are ya? I ain’t got all day fella, so you’d better stop lookin’ at me funny an’ start talkin’’

The man looked impatient. He had bright eyes. Alfred searched, his mind filling with the same rancid fog already stifling his airways, for the last impatient face seen in his perfect city. He couldn’t remember.

‘I’m a politician.’ He whispered

Alfred sorely wanted a guide, or to run back to his comfortable flat in the comfortable East End. He reminded himself that he wasn’t here for comfort, he was here for truth. The Truth, he was certain, was more often than not uncomfortable.

So, he followed the man whose name was Jim down into the darkness. Uncomfortably. Jim walked with a slight limp, favouring his left side. But he was agile for his age – whatever that impressive number may have been. And his hands were deeply lined, stained, and worn. Like the ploughed fields surrounding London, where cloned potatoes grew in their millions. Farmed by machines. A creeping feeling gathered in the depths of his gut; crawling and gargling,

not to think about truths,

forget about the Underground.

This was Reason, probably. Or perhaps just plain old Fear. Fear was a well-versed friend of Alfred, even in his perfect Upside. But fear was an even better friend of the Tellers of Lies. For they used it to keep the sacred, roaring truth at bay.

A rumble shook the damp concrete tomb as the ascended another broken escalator. Jim called for him to hold his breath and covered his own wrinkled face with a red handkerchief. Suddenly, a murky gas came bursting through vents in the walls. Curling tendrils raced towards them, reaching for new substances to sour. Alfred’s eyes stung, and despite the makeshift gasmask his throat contracted in anticipation of the substance which engulfed the men. Jim’s shouts came muffled through his fabric mask,

‘Ah shit, told yer so! Sleepy gas I thinks, stop anyone from carin’ too much about anythin’.’

The old, old man grasped the politician’s wrist with an iron grip and pulled him down through the choking clouds further into the depths of the Underground. They reached an intersection where the air seemed clear once more and Alfred heard a clamouring of voices. His heart raced, faster than the trains which used to run here. “Piccadilly line” read the battered sign. He pulled the contraption off of his clammy face, earning sceptical eyes from Jim, who looked red and weary.

He led Alfred onto the station, and, as a seasoned tour guide might, began to narrate all that the stunned poly-what could see.

‘Ah yes, ‘ere we are on the Picadilly my friend. Best place to lay your weary ‘ead after a ‘ard day’s work. Work, my bloody favourite! I label cans, yessir, best labeller that ever did live. Dunno where they take ‘em though, not for us those ones. Not food. Dunno what’s in ‘em either. Can’t read. We’re the outcasts mate, lowest of the low, scum of the earth – at least, thas what ‘arry says. I been ‘ere since I were born. I’ll take ya to him’

Alfred thought they had machines to label cans these days. Did he think this, or had he just been told?

On the dank platform sat dead carriages of a train, some filled with sleeping bags. One had what Alfred thought might be a market inside. It was busy here, bustling people. A lot of them old, most of them dirty, bartered and argued in an alien form of English. There was grey bread and cans of food being exchanged. Children were crying, mothers trying to comfort them with gristly singsong tones. The thick array of accents clambered and became a rhythmic drumming in Alfred’s ears. Someone somewhere, or perhaps it was everyone everywhere, had a hacking cough that made Alfred want to hold his breath. These people are hungry, thought Alfred, who had never been hungry. These people are diseased. He squeezed past the strangers, trying not to draw attention to himself.

Sat at the end of the carriage was a man under a flickering florescent light. Jim beckoned to the man, who looked almost prehistoric to Alfred. Smelled it too.

‘ ‘ere boy, talk to ‘arry, he knows all about this place and yours. He tells us every day, but no one listens. Tells me we been put down ‘ere long ago, well not me, my folks or the like. Tells me there’s other people above us who live different. Tells me we work for ‘em. We ain’t allowed to meet ‘em though. S’pose no one much cares about people they ain’t ever met, or ‘ow they ain’t ever ‘ungry.’

Alfred sat down on the crusty tube train seat in front of the Dinosaur man and saw glimmers of long lost Truth in his eyes. 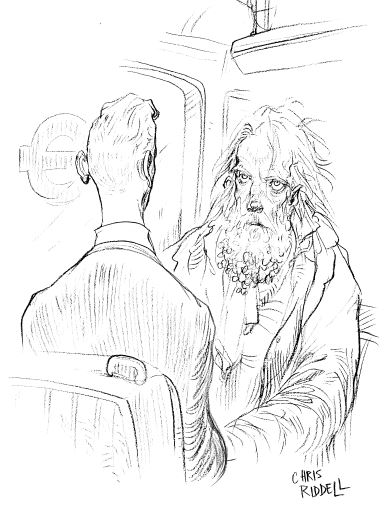